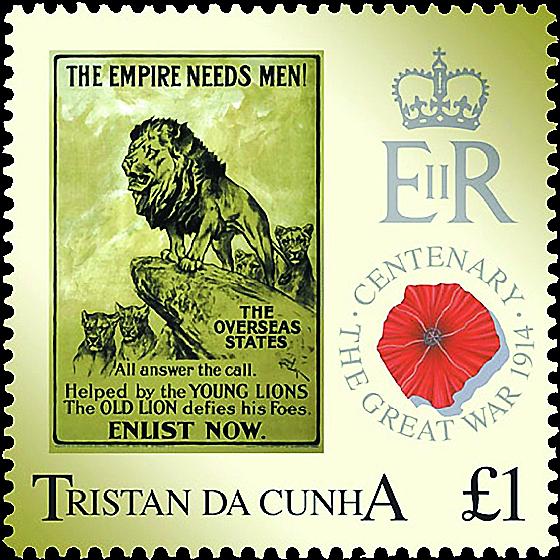 Figure 6. A set of stamps from Tristan da Cunha shows World War I recruitment posters, including this one with a lion and cub representing Great Britain and the dominions.

Figure 5. A New Zealand poster for the Woman’s Land Service is shown at left, and a World War II poster in Maori is on the right. 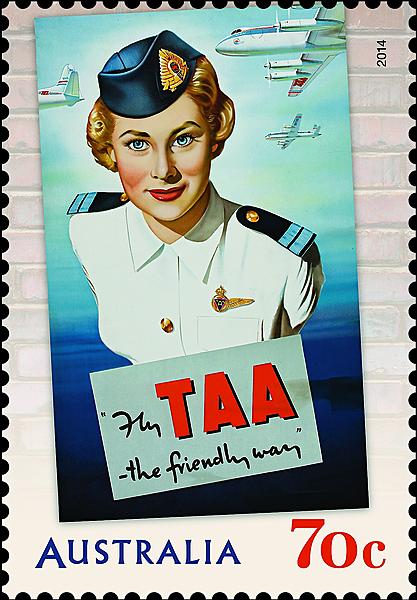 Figure 4. A Trans-Australian Airways poster from the 1950s is included on a stamp in Australia’s Nostalgic Advertisement set of five to be issued Aug. 19. 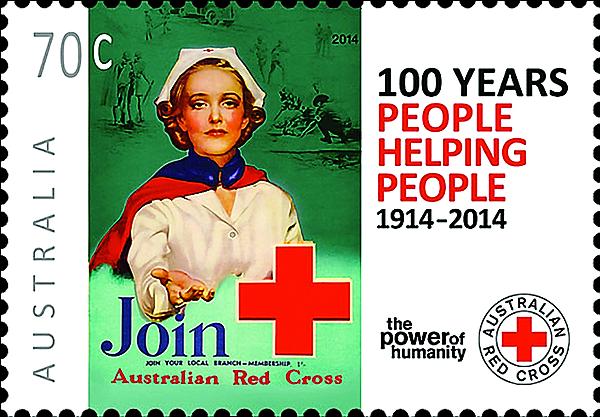 Figure 3. A vintage Red Cross recruitment poster is pictured on this 70¢ stamp commemorating the 100th anniversary of the Australian Red Cross.

Figure 2. Two Grace Kelly movie posters, one for The Country Girl and one for Dial M For Muder, are shown on stamps from Monaco. 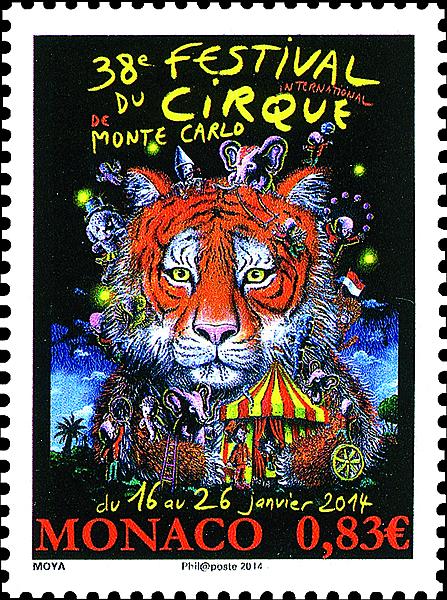 Monaco has a long history of featuring circus posters on stamps, starting in 1975 with a clown poster on an 80-centime stamp commemorating the second International Circus Festival in Monte Carlo (Scott 999).

The latest stamp in this series is shown in Figure 1. This €0.83 commemorative (Scott 2742) was issued Jan. 6 to promote the 38th International Circus Festival.

Visual and digital artist Patrick Moya designed the poster and the stamp.

In addition to the tiger depicted prominently in the center, the design includes three elephants, a variety of other creatures, and circus performers.

Kelly won an Oscar for her 1954 film The Country Girl, also starring Bing Crosby and William Holden. The €1.38 stamp shows a poster for the French-language version of this film, Une Fille de La Province (Scott 2743).

Similarly, a poster for another 1954 film, Dial M For Murder or Le Crime etait presque parfait in French, is featured on the €2.40 stamp(Scott 2744). Kelly, Ray Milland and Robert Cummings starred in this Alfred Hitchcock thriller.

In 1956, Kelly married Prince Rainier III of Monaco, becoming Princess Grace. The prince initially banned the showing of her films in Monaco, but later relaxed the ban.

France’s government printer, Philaposte, printed the three recent stamps for Monaco. The International Circus Festival stamp is in panes of 10, and the Grace Kelly Movies stamps are in two panes of six.

Poster designs are reproduced on two of Australia’s 2014 issues.

The Australian Red Cross stamp shown in Figure 3 is based on a poster from World War II. Figure 4 pictures a stamp from an upcoming set called Nostalgic Advertisements.

The poster on the Red Cross stamp depicts a nurse with her hand outstretched in the foreground, with scenes of rescue and aid in the background.

The text on the poster urges people to join their local Red Cross branch.

A similar poster design was used by the American Red Cross. It features the same nurse but has different disaster scenes in the background. R.C. Kauffman illustrated this poster.

Australia Post issued the 70¢ stamp May 6 to commemorate the 100th anniversary of the Australian Red Cross.

Lisa Christensen designed the stamp, and McKellar Renown printed it by offset in sheets of 10 with moisture-activated gum and as a self-adhesive in coil rolls of 200.

Australia Post will issue five 70¢ Nostalgic Advertisement stamps Aug. 19. An article in the July-August issue of Australia Post’s Stamp Bulletin said, “The 20th century advertisements in this issue recall a bygone era of both poster design and Australian manufacturing.”

The article also refers to the Trans-Australian Airways (TAA) poster, which is shown on the stamp in Figure 4, as perhaps the most famous of all.

According to the Powerhouse Museum, a museum of science and design in Sydney, Australia, the Noel Paton advertising agency created this poster in the 1950s using an illustration by Ralph Malcolm Warner.

The museum’s website described the artwork: “This bold Australian travel poster design features a slightly Surrealist design in which Nola Rose, a Bondi Beach beauty contest winner, appears as an air hostess who appears to float in space. Her vivid blue eyes gaze confidently out at the viewer as three four-engine 700 series Viscount aircraft fly right to left behind her.”

Another stamp in the set shows a 1930 Victorian Railways travel poster for Victoria Island featuring a penguin.

Two other birds, a kookaburra and swallow, are pictured on two stamps. They advertise Jacko Shoe Shine produced by the Jacko Polish Co. and Teddy Bear biscuits manufactured by Swallow & Ariell, respectively.

The fifth stamp in the set pictures an advertisement for Harper’s Empire self-rising flour.

Sonia Young designed the stamps. McKellar Renown printed them by offset in separate sheets of 50, and the five designs are se-tenant (side-by-side) in a souvenir sheet.

Many countries have issued or will be issuing stamps this year commemorating anniversaries of World War I and World War II, and several of these stamps show posters.

For example, WWII poster art is reproduced on six New Zealand stamps issued April 2 to mark the 75th anniversary of the outbreak of the war (Scott 2511-2516).

The stamps reflect six groups that contributed to the war effort overseas and at home. A Woman’s Land Service poster is shown on the 70¢ stamp at left in Figure 5, and a poster in the Maori language appears on the $2.90 stamp at right.

On the poster reproduced on the stamp, the inscription to the left of the woman on the tractor reads, “Good Wages. Smart Uniform. Full Working Kit.”

New Zealand Post said of the poster pictured on the $2.90 stamp: “The war effort included appeals made in Maori to ensure all citizens were informed and persuaded. Such posters were rare, as government messages were usually delivered orally on marae [the Maori meeting place]. This poster asks for funds for weapons for the war effort, with one line of the text translating to ‘without weapons we shall perish.’”

Shown on the other four stamps in the set are posters calling youth (ages 16 to 18) to join the Air Training Corps, 70¢; encouraging men to join the Royal New Zealand Air Force, $1.40; and promoting the raising of money for the war through liberty loans during Navy Week, $1.90, and Army Week, $2.40.

Southern Colour Print printed the stamps by offset in sheets of 25. A booklet containing the stamps in souvenir sheets, including one with the six designs se-tenant, also was issued.

A 1917 poster for Britain’s Woman’s Land Army of WWI is among those featured on a set of four £1 stamps to be issued Aug. 4 by Tristan da Cunha, a remote South Atlantic island that was a dependency of the British colony of St. Helena during that war.

According to Pobjoy Mint, the new-issue agency for Tristan da Cunha, the post office decided to show posters on its stamps marking the 90th anniversary of the beginning of WWI “rather than depict images of a War in which no inhabitant participated.”

In addition to the aforementioned Women’s Land Army poster, the stamps show recruitment posters with the messages “Join the Royal Marines,” “Rally Around the Flag” and “The Empire Needs Men.”

The last-mentioned poster is shown on the stamp in Figure 6. In this poster designed by Arthur Wardle and published by the Parliamentary Recruitment Committee, the lion symbolizes Great Britain and the cubs represent the overseas dominions.

Derek Miller designed the stamps. BDT International printed them by offset in sheets of 10.

Related WWI commemoratives from other postal administrations include two featuring the famous United States “I Want You” Uncle Sam poster. Nevis and Tuvalu issued these stamps March 5. Both are in souvenir sheets.

The British recruitment poster that inspired the Uncle Sam poster is pictured on a stamp from Gibraltar, which was shown in the March 31 Linn’s, page 34.