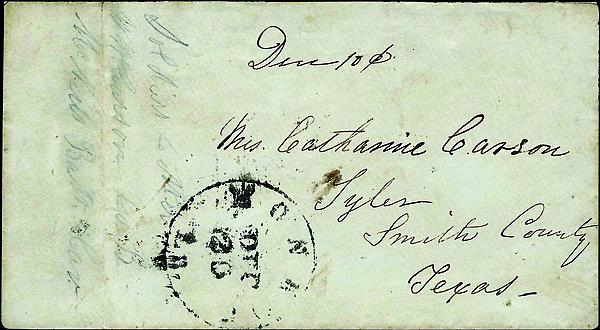 Figure 3. A cover similar to the example in Figure 2, but with a letter dated Feb. 17, 1865, in Chicago. This cover also traveled to Tyler, Texas, via Monroe, La. 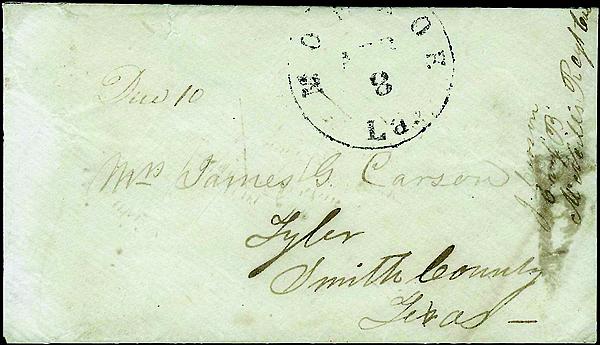 Figure 2. Civil War turnabout mail sent surreptitiously from one postal system into the other can be difficult to identify. An 1863 letter from New York accompanies this cover, which traveled to Tyler, Texas, via Monroe, La. Courtesy Robert A. Sieg 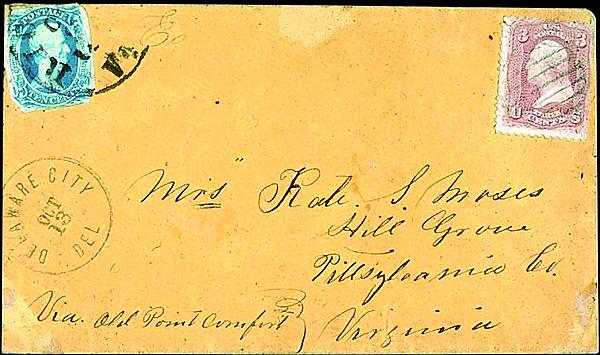 The American Civil War provided myriad opportunities for each side to utilize resources captured from the other side in battle.

One Union soldier remarked, when studying the bounty from a captured Confederate camp, that there were more Union-manufactured supplies and equipment there than in his own camp.

The mail system was no exception. Confederate soldiers invading the North often sacked post offices, sometimes attempting to use United States stamps on their own mail (which was illegal in the South), but also surreptitiously using them to leave letters addressed to friends and family in the North.

When control of the post office returned to Union forces, those letters often unwittingly were transported within the system to their destination, sometimes carrying information or intentions that might have been deemed treasonous.

Likewise, Union spies used captured Confederate stamps to send bogus letters to addresses in the South, including faked letters to Jefferson Davis and other leaders.

Turnabout mail in the Civil War, technically illegal, often made it through the system anyway. While it is hard to find legitimate documented examples today, the field comprises a fascinating element of postal history to study.

In many cases, the only way to document such usage is to have the actual cover, as well as the verifying letters documenting such usage, both in hand.

Soldiers frequently reported using turnabout mail, but their actual covers or letters are often lost to obscurity unless a lucky collector happens to connect the dots.

Complicating matters, many Civil War postal history experts estimate that a very large percentage of wartime correspondence never traveled through conventional mail channels, being carried home by soldiers on leave, transported by colleagues in the navy, or moving through other unconventional means along rail and wagon routes.

An average regiment could send out 600 letters a day, but only a lesser percentage of them actually had regular postage affixed in advance — the addressee could pay later in some cases — or were entered formally into the regular mail service.

Some enterprising profiteers intentionally ran counter service or secret mail services that were almost as regular as “home” service.

Absalom Grimes was able to serve families in Union-held Missouri with a postal connection to soldiers in General Price’s Confederate army much further south. The difference, however, was that Grimes did not piggyback his rebel mail illegally through the regular Federal service; he carried it himself, and often at great peril, since transporting enemy mail was also considered treason.

Grimes is also known for pioneering a siege mail system for trapped Confederate soldiers in the city of Vicksburg.

Turnabout mail, however, is mail that did proceed through regular service, but for the wrong side. Evidence of this phenomenon can be found in primary sources.

Confederate soldier William Chamberlaine, in his account of participating in the Gettysburg campaign, reports stopping in Hagerstown, Md., and leaving mail for his family in Baltimore with appropriate Union postage in the temporarily rebel-occupied post office. When Federal control of the town resumed, the letters went forward to his family with no one the wiser.

Another example comes from the personal correspondence of Col. Frank Huger, C.S.A., who, seeking news of a friend currently in New York, encouraged his contact to “get me some news” from an old sergeant at the general hospital who “will do the underground business for you” (presumably, transmit a surreptitious message using the regular Federal mail system).

Similarly, another rebel letter carried privately for part of its journey refers to an “underground railroad” postal system employed to defy regulations and borders.

The War of the Rebellion: a Compilation of the Official Records of the Union and Confederate Armies, published by the U.S. War Dept., has numerous examples and records of enemy post offices, mail and postage stamps being captured, and the subsequent discussions of what to do with them.

“General Stuart … Took mail and postage stamps from office,” a worried Union officer wrote, unsure of what value the stamps could be. Stuart, a Confederate cavalry officer, gave a “receipt and promise to pay … ”

In fact, Stuart, John H. Morgan, and other Confederate raiders were often reported as “seeding” propaganda in the Union mails when they raided Federal-controlled towns, although what if any impact these quasi-mail pranks had on the wider war is not clear.

In a similar fashion, Union officers frequently reported Confederate postage stamps among the booty they collected in captured towns, and sometimes discussed in official correspondence what to do with them.

Sometimes they destroyed them, but other times they discussed possible counterespionage possibilities: using the stamps for devious purposes in some cases on otherwise unremarkably marked enemy covers.

Identifying covers and markings indicating that a piece was actual turnabout mail is quite difficult. John Kimbrough and other wartime postal history experts agree: “[This is] something that is extremely difficult to identify as there are no special markings for this sort of thing. To properly identify such items as I see it would require having the original contents as well as carefully analyzing the addresses and the family history associated with the names.”

Unlike typical “through the line” covers from prisoners of war that exhibit traceable markings (Figure 1), turnabout mail was always done in secret because of the harsh penalties for espionage and treason.

Therefore, turnabout mail is extremely difficult to find. Nonetheless, a few examples can be found in the auction literature.

The covers shown in Figures 2 and 3 are from the Louisiana postal history collection of Erin R. Gunter, auctioned in 2008 by Robert A. Siegel Auction Galleries.

The descriptions by Siegel note that Gunter described these covers as “through the lines via Monroe,” adding that how that was accomplished is unexplained. Both covers are accompanied by letters that Siegel notes cannot be confirmed as going with the covers, though the letters appear to be in the same hand.

Siegel sold covers in 1998 from the Rives correspondence that exhibited markings from different cities in the opposing warring sections (Charlottesville, Louisville, New York City and so on) that were sent by private carrier for part of their difficult journey.

Invalid postage penalties, censorship and attempted erasure of part of the message, and frequent delays were part of the process before such cross-sectional mail was banned and had to exist completely underground.

Siegel says in its auction literature that it is “not clear” how letters went from one destination to another before entering traceable mail. Much of the “not clear” mail and accompanying letters can be attributed to what I am calling turnabout mail.

It is clear from the primary and secondary evidence that turnabout mail was carried by both sides during the war. Now the collecting challenge: Can you find an example, or do you know of one and are you willing to share it?

Jack Trammell teaches at Randolph-Macon College in Ashland, Va. He can be reached atjacktrammell@yahoo.com.