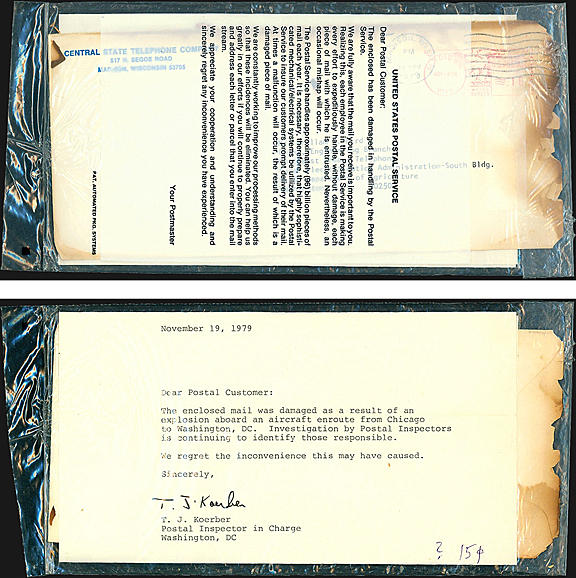 This 1979 cover was damaged when a mail bomb ignited on a Chicago-to-Washington flight. It will be offered by Rasdale Stamp Co. during its Aug. 23 auction.

A scorched but otherwise plain business envelope damaged by an early failed plot by Theodore Kaczynski — the infamous American mail bomber known as the Unabomber — will be offered at public auction Aug. 23 by Rasdale Stamp Co. of Westmont, Ill.

The envelope is still sealed inside a United States Postal Service “body bag,” a printed plastic sleeve used to protect the surviving contents of letters found damaged in the mailstream.

The envelope was among the mail being ferried to Washington, D.C., on American Airlines flight 444 on Nov. 15, 1979. A mail bomb created by Kaczynski also was in that cargo hold. The Kaczynski mailing ignited while the plane was in flight and billowed smoke but failed to explode. The plane landed safely.

The scorched envelope offered in the sale was originally mailed in Madison, Wis., franked with a 15¢ postage meter stamp, postmarked Nov. 14, and eventually loaded in Chicago on the Washington-bound flight.

An enclosed explanation from T.J. Koer­ber, the Washington postal inspector in charge, is dated Nov. 19, 1979, and states in part: “The enclosed mail was damaged as a result of an explosion aboard an aircraft enroute from Chicago to Washington, D.C. Investigation by Postal Inspectors is continuing to identify those responsible.”

The FBI launched its own investigation following this event, and captured Kaczynski in 1996.

The envelope is listed in the auction catalog with a suggested bid of $100.

The auction will take place at the Rasdale Stamp Co. Auction Gallery in Westmont. Bidding is also available online, and by mail, fax or telephone.