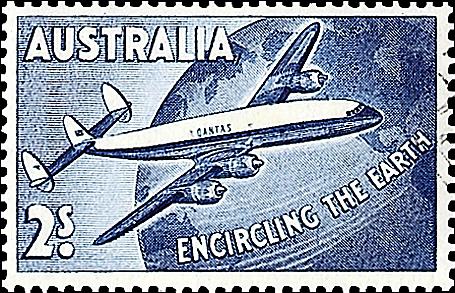 Figure 8. The last Australian airmail stamp was issued in 1958. The 2sh stamp shows a plane from the Qantas fleet. 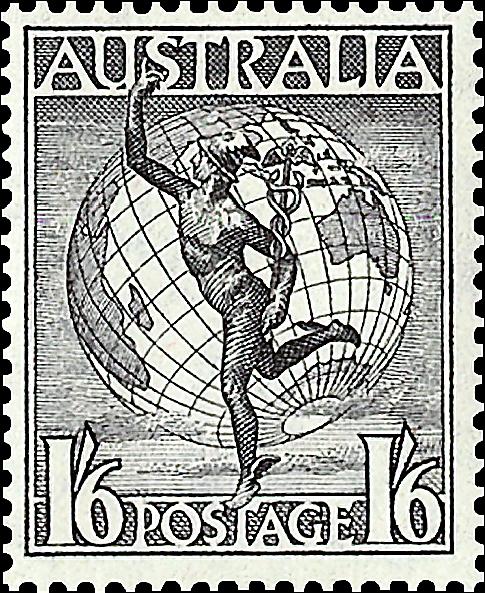 Figure 7. The sepia 1 shilling, 6d Mercury with Globe stamp was first issued in 1949. A second variety issued in 1956 was printed on unwatermarked paper. 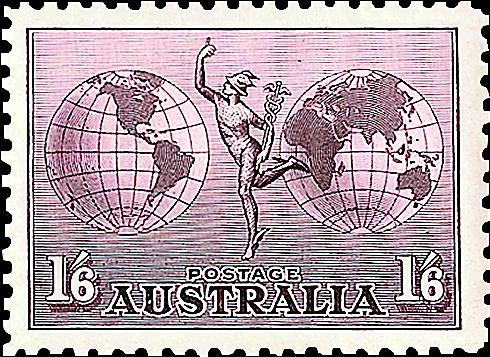 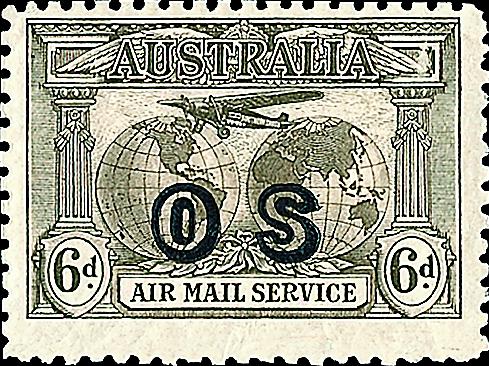 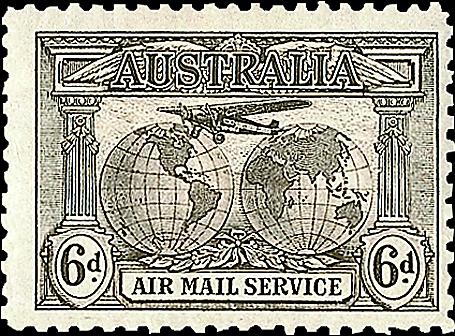 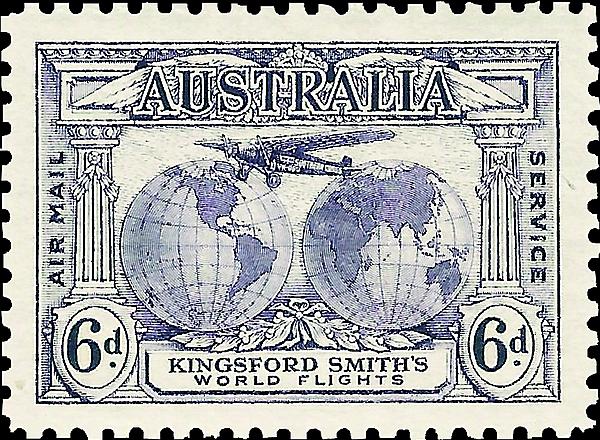 Figure 3. Australia’s 1931 6d gray violet stamp has the words “AIR MAIL” and “SERVICE” along the right and left sides. 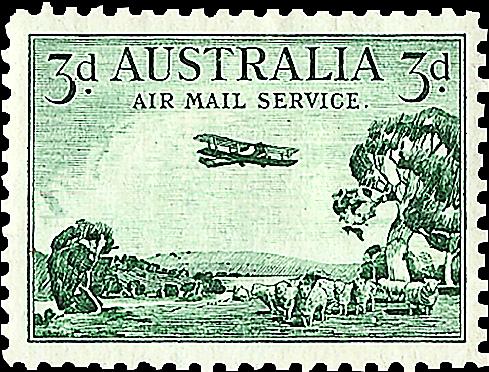 Collecting airmail stamps used to be an extraordinarily popular specialty, and it is still enjoyed by many collectors. Fewer airmail stamps are being issued today, as much of the first-class mail, both domestic and international, is traveling by air without the need of airmail service-inscribed stamps or additional fees.

By simply acquiring one of each stamp, have you completed an Australian airmail collection?

The first Australian airmail stamp was issued May 20, 1929, in anticipation of an airmail route from Adelaide in South Australia to Perth in Western Australia. The first flight was scheduled for June 2, 1929, but weather delayed it to June 3.

The stamp was printed on paper that was moistened prior to being put through the press. This “wet process” allowed the paper to take the ink more readily.

The downside of wet printing is that when the paper dries it shrinks a little bit, thereby shrinking the design with it. The shrinkage can be from side to side or top to bottom, depending on the mesh of the paper. It is this shrinkage that causes the two varieties of the 1929 3d airmail stamps from Australia.

Type A has vertical mesh paper, and the image measures 31 millimeters horizontally by 22mm vertically. Type B has horizontal mesh paper with an image that measures wider, 31¾mm by 21½mm.

Figure 2 shows the upper segments of the Type A stamp at top and the Type B variety at bottom. The edges of the design are aligned at the left, so by looking at the right sides you can see that the bottom image (Type B) is a bit wider.

It is worth looking for these varieties, because Australian specialized catalogs list Type B at about twice the catalog value as Type A.

These stamps were also issued in a booklet with three panes. Each pane contained two rows of two stamps.

Finding the complete booklet or even a single pane is neither easy nor inexpensive, but you might be able to find a single stamp that came from a booklet if you are lucky.

The booklet stamps have a dot printed in the top and bottom margins between the booklet stamps. The problem is that perforations might eliminate the dots, but it is still worth looking.

Another variety is an official perfin of the initials “O.S.,” which stand for “On Service,” a form of Official stamp (listed as Scott OCC1 in the Scott Classic Specialized Catalogue of Stamps and Covers 1840-1940).

Some Australian specialized catalogs give the perfins more than double catalog value. For Scott OCC1, the 2014 Scott catalog value for the unused “O.S.” perfin stamp is more than three times that of the standard issue, Scott C1.

Australia’s next two airmail stamps were issued as part of a 1931 set of four to commemorate the flights by Charles Kingsford-Smith aboard his plane the Southern Cross, which is shown on both of these 6d stamps.

Scott C2, shown in Figure 3, is a gray violet stamp that has “AIR MAIL” inscribed on the left side of the stamp and “SERVICE” along the right side. That feature can be used to differentiate it from Scott C3, its doppelganger in olive brown. That stamp has “AIR MAIL SERVICE” in the bottom banner.

The gray violet 6d stamp exists with a variety known as “extra islands.” Check the Indian Ocean, just east of Madagascar, in the stamp design. The normal stamp has two small islands off Madagascar. The variety has several more.

You need a really great magnifying glass to work on this one.

The olive-brown 6d airmail (Scott C3) is not as complicated. The stamp is shown in Figure 4.

As far as varieties go, you have to check out the “OS” overprint on the 6d olive brown (Scott CO1). This stamp, pictured in Figure 5, was used for Official airmail.

Scott has two listings for the 1 shilling, 6d airmail stamp first issued in 1934. The stamp design shows the god Mercury in flight between the two hemispheres of the globe.

The violet brown stamp in Figure 6 (Scott C4) was recess-printed on unwatermarked paper and has perforations that measure gauge 11. You will need that excellent magnifying glass again on this stamp to look for excess islands off the coast of Java, located northwest of the west coast of Australia. Those tiny extra islands are worth looking for, because according to specialized Australian catalogs, the islands add extra value.

Three years later, the same design used for the 1934 airmail stamp was used again, but this time it was printed on thicker paper that has a multiple small crown and “C of A” watermark, and perforations that gauge 13½ by 14 (Scott C5).

What is nice about these stamps is that the watermark is usually quite visible without having to use any watermark fluid or fancy gadgets. Just place the stamp face down on a dark background and you should be able to see the watermark (if one exists).

Unlisted by Scott is a third version of the Mercury and Hemispheres 1sh6d airmail stamp issued in 1948, this time printed on thin paper. Again, it has the multiple small crown and “C of A” watermark, with perforations that gauge 13½ by 14.

How do you know if your stamp is on thin paper or thick paper?

You can use a micrometer if you have one, or you can try the “flick test.”

Grasp the stamp with tongs, and with your other hand lightly flick the stamp with your fingernail. If the stamp makes a sharp snapping sound, it is on thin paper. If it makes a rather dull sound it is thick paper. It might take a little practice to learn this technique, but it does work.

Two stamps with a smaller, vertical Mercury with Globe design were issued in 1949 and 1956, respectively. The design is shown in Figure 7.

The last of Australia’s airmails was issued in 1958 and features a Super Constellation aircraft, used by the Qantas airline for its around-the-world route (Scott C8). The dark violet blue 2sh stamp is pictured in Figure 8.

If you are looking for an easy to complete one-of-each kind of collection, Australian airmails fill that bill.

But if you enjoy looking for varieties and don’t mind spending time bent over a powerful magnifier looking for tiny islands dotted on a stamp, then the Australian airmails can also provide that sort of fun.

No matter how you collect, Australian airmail stamps are worthy of consideration.