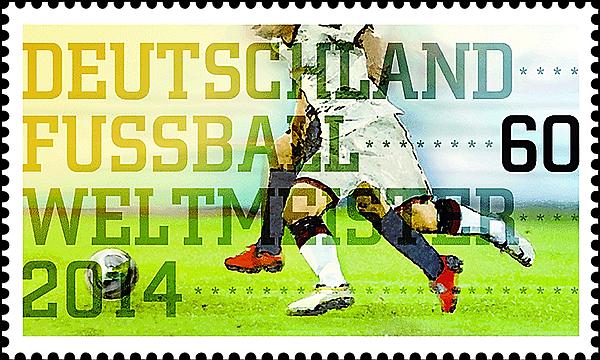 On July 17, Germany will issue a €0.60 stamp commemorating its national team’s World Cup victory. The stamp was announced just hours after the team defeated Argentina 1-0 on July 13.

Within hours, Deutsche Post announced that on July 17 it would issue a new €0.60 commemorative marking the nation’s fourth World Cup championship.

The new stamp shows a photograph of two players on the pitch running toward a soccer ball: a member of the German team in the foreground, with an opponent mostly obscured behind him.

The players’ identities cannot be discerned from the design, as the image is cropped so it does not show faces, and no uniform numbers are visible.

The denomination “60” is printed in large black numerals on the right side of the stamp.

The Wall Street Journal reported July 14 that five million stamps were printed before the final match was played.

The article by Harriet Torry quoted German Finance Ministry spokeswoman Marianne Kothe as saying, “We always firmly believed in a success of the German team.”

The multicolor offset-printed stamps are manufactured by Giesecke & Devrient in panes of 10 (two across and five down) with a dozen match scores printed in both the left and right margins (as 2:0, 4:3, 3:1 and so on).

The stamp was designed by Lutz Menze, using an image by sports photographer Clive Mason for Getty Images.

The €0.60 value on the new stamp fulfills the rate for a domestic letter weighing up to 20 grams (about 0.7 ounces).

Information about new German stamps is available online at www.efiliale.de.

The new issue agent for Germany in the United States is Stamp Services in North America at www.stampagencies.com; or write to Germany Stamp Agency in North America, One Unicover Center, Cheyenne, WY 82008.