Greek definitives for months of the year; summer stamps 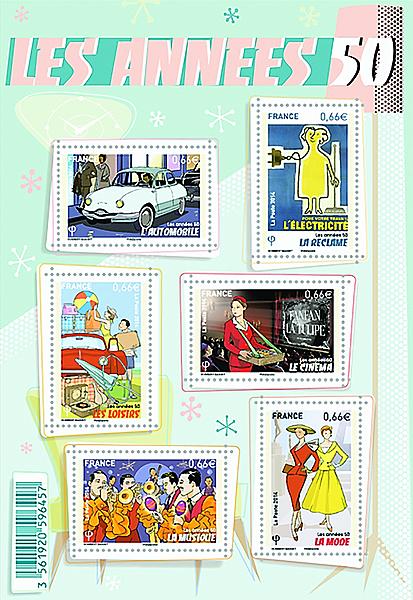 Figure 7. A pre-vacation car-packing scene is pictured on one stamp in this French pane highlighting prosperity after World War II. The pane was issued June 23. 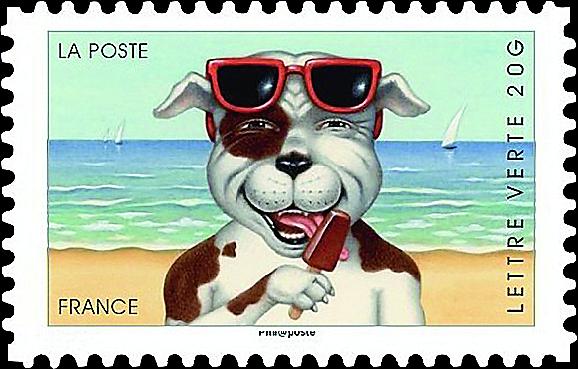 Figure 6. A dog enjoys a beachside vacation and an ice cream bar on a stamp from France’s new Vacation booklet. 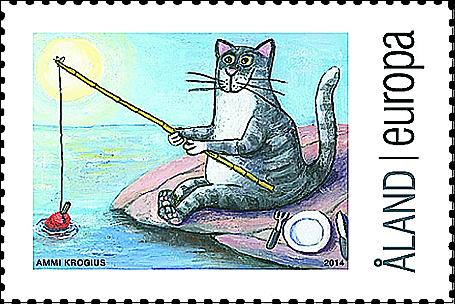 Figure 5. A cat is fishing for its dinner in the illustration by Ammi Krogius for Aland’s Summer stamp issued May 31. 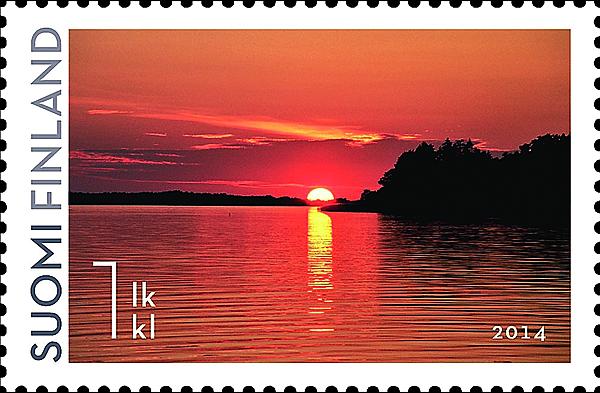 Figure 4. Sunset over a lake is shown on this Summer stamp issued May 5 by Finland. 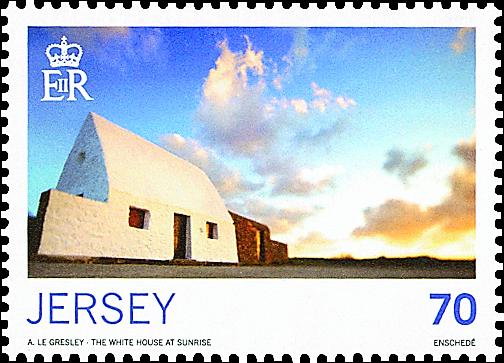 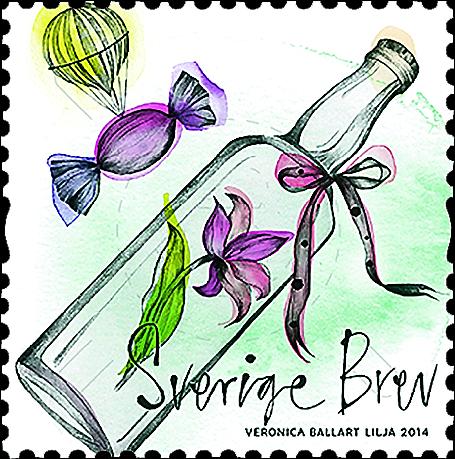 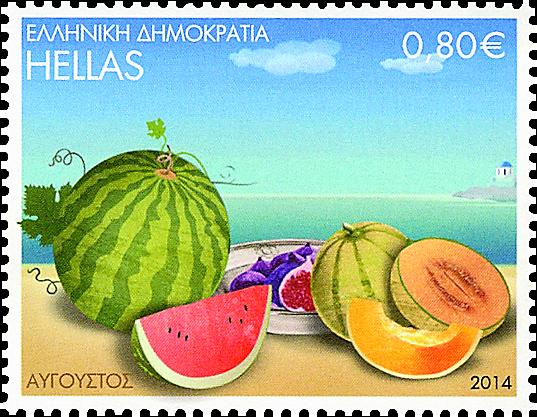 Greece introduced new definitive (regular-issue) stamps April 24. The issue is called the Months in Folk Art and includes one stamp for each month.

The new-issue announcement said: “Greek folk culture, whose roots stretch deep back into the past, has produced a remarkable number of folk traditions and a seemingly endless wealth of folklore.

“Local folk traditions have also changed the names given to the 12 months of the year. Different, interesting names have been assigned to the months based around agricultural activities, local customs, saints’ feast days and religious ceremonies, as well as changes in nature occurring during each month, and other events that occur during the year.”

Among the folk traditions represented on the stamps are Apokries, the Lenten festival also known as Carnival, for February; and Protomayia, the May 1 festival of flowers, for May.

The €3 February stamp shows Carnival masks, and the €2.62 May stamp pictures a floral wreath on a door.

A few of the stamps feature nature scenes in addition to folk traditions.

For example, the €0.02 stamp for April pictures butterflies, birds, a ladybug and flowers, along with red dyed Easter eggs.

Figure 1 shows the €0.80 stamp for August. It depicts some of the fruits of summer — watermelon, other melons and figs — on a beach. Grapes hanging from a vine and in a basket are illustrated on the €1 stamp for September.

Eleni Apostolou designed the stamps. Joh. Enschede of the Netherlands printed them by offset with moisture-activated gum in sheets of 25 and as self-adhesives in booklets of 10.

The Swedish post office, Posten AB, celebrates summer with a booklet of stamps issued May 8.

These nondenominated first-class stamps inscribed “brev,” Swedish for letter, were issued May 8.

Although they are her first stamp designs, she is familiar with the hobby because she collected stamps as a child and belonged to a stamp club.

She also incorporated the theme of communications into some of the stamp designs.

For example, the stamp in Figure 2 represents a message in a bottle.

The other designs depict flowers with paper airplanes; balloons carrying candy, a present, a trumpet and a ladybug; a cake with candles; and a bouquet of flowers.

These Swedish self-adhesive stamps were printed by offset in booklets of 10.

Photographs of local scenes are reproduced on Summer stamps from Jersey and Finland.

Jersey Post issued eight Summer stamps June 30. They are the first in a series highlighting the seasons.

Each stamp shows a photograph taken by Andy Le Gresley of Jersey, who specializes in wedding, commercial and landscape photography. Le Gresley also designed the stamps.

On his website, Le Gresley said: “My style of landscape photography is influenced by my passion for the natural world — I’ve always been drawn to beautiful landscapes but in particular the coast. I love to shoot in challenging conditions, i.e. interesting weather, low light or unusual places. This pushes me to find images that others don’t and which can often be more powerful.”

The 70-penny stamp in Figure 3 shows Gresley’s 2010 photograph of sunrise at a cottage nicknamed “white house.”

The 69p stamp doubles as Jersey’s Sepac stamp for the year. Countries of the Small European Postal Administrations Cooperations, or Sepac, issue stamps each year reflecting a common theme.

The 2014 theme is flowers, and the aforementioned Jersey Summer stamp pictures flowers in bloom at Fisherman’s Chapel on St. Brelade’s Bay.

Finland’s six self-adhesive Summer stamps were issued May 5 in a credit-card size foldable booklet. The booklet measures 55 millimeters by 85mm when closed, and 164mm by 85mm when opened.

All of the stamps are nondenominated, paying the first-class rate.

In a press release, Finland’s post office, Itella, said: “The themes include sunsets, lakes and the sea, fields, and forests. With his photographs, Janne Groning wants to relay relaxing and therapeutic nature experiences to all who cannot or do not have the time to visit nature themselves.

“The views featured on the stamps were photographed in Inio, the lsland of Keistio, the shore of Lake Nasijarvi, Nauvo, and the Salo region.”

Joh. Enschede printed both the stamps from Jersey and Finland. The Jersey stamps are in sheets of 10.

A comic view of summer is pictured on Aland’s Summer stamp shown in Figure 5.

The illustration by Ammi Krogius shows a cat sitting on a rock and fishing. The cat’s confidence in its fishing abilities is displayed by the plate, knife and fork by its side.

Krogius said of her stamp design: “This motif came out of a sensation of sitting on a rock, angling. I was thinking of how much I enjoy the Aland archipelago.”

As for why she selected a cat, she said: “I want my paintings to tell a story, but it must be a positive story, not a sad one. This time, I chose a cat; I like cats. They are bon vivants, sly and wise, indeed, many of their qualities remind very much of us.”

The stamp is nondenominated. The “Europa” inscription indicates that it pays the rate to other European countries, currently €1.10.

The Canadian printer Lowe-Martin printed it by offset in sheets of eight. The stamp was issued May 31 in a quantity of 50,000 sheets.

Customers also can create their own personalized central design for this stamp using the frame with the country name and the “Europa” service inscription.

On a booklet of 12 French Vacation self-adhesive stamps issued May 5, cartoon animals are shown engaging in a variety of summertime experiences.

On the stamp shown in Figure 6, a dog enjoys an ice cream bar on the beach.

A beach also is included on three other designs in this Vacation set: fish surfing; a crab building a sand castle; and a lobster preparing for a variety of beach activities with a net, a pail, flippers, a mask and an inflatable swim ring with a bird’s head.

In addition, a pair of frogs are relaxing under umbrellas on a swan-shaped boat on an alpine lake.

Three music-related designs depict a turtle strumming guitar, two cats dancing at night under lanterns in the three colors of the French flag (blue, white and red), and a hen and egg with headphones.

For those who prefer more strenuous activities on their vacations, an alpine sheep is going mountain climbing, and a family of three rabbits are riding uphill on a tandem bike.

The remaining two designs feature camping, with a snail hauling a camper on its back on one stamp, and geese camping in a tent on the other.

All of the stamps are nondenominated and pay the green letter rate for letters weighing up to 20 grams. Green letters take up to two days for delivery and are not transported by plane.

France’s Philaposte printed the Vacation stamps by gravure in a quantity of 3 million booklets.

Another recent French stamp features a summer scene from the past. This €0.66 stamp issued June 23 shows a 1950s-era couple loading up the car before going on a beach vacation.

In addition to suitcases and a large trunk, the couple are packing a record player, radio, beach umbrella and gigantic beach ball for their trip.

The stamp is one in a pane of six taking a nostalgic look at post-World War II prosperity and optimism in France. The pane is shown in Figure 7.

The aforementioned stamp is inscribed “les loisirs,” which translates to recreation.

The automobile, advertising, cinema, music and fashion are represented on the other stamps, each denominated €0.66.

The designs include a Panhard Dyna car, an advertising poster for electricity, and a woman selling snacks while the audience watches the 1952 comedy-adventure Fanfan la Tulipe.

Stephane Humbert-Basset designed the stamps and the pane. They were printed by gravure in an edition of 700,000 panes.