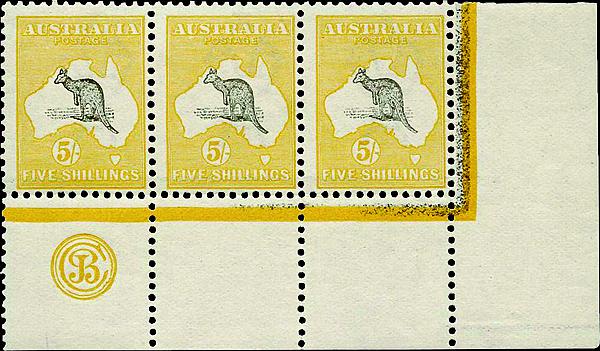 Australian stamps from the Julian Sterling collection were offered by Mossgreen in Melbourne, Australia. This monogram strip of three of the 1913 5-shilling Map and Kangaroos stamp realized $42,900, including the buyer’s premium.

Mossgreen, a boutique art and collectibles auction firm in Melbourne, Australia, offered the first part of the Julian Sterling collection of Australian stamps April 30 in conjunction with the German firm of Christoph Gaertner.

Sterling (1923-2012) collected Asian art and classic automobiles before turning to stamps in later years, specializing in the Map and Kangaroo issue and George V definitives that reminded him of his childhood. Both long-running series are popular with collectors because the stamps range from cheap to expensive and offer broad opportunities for specialization.

The best-selling items in the Mossgreen sale were margin strips of three of the 2-shilling and 5s “Roos” of 1913 with printer’s monograms in the selvage.

The circular monograms identifying the firms that printed the stamps were not a subject of great collector interest until after the stamps had become obsolete. As a result, surviving pieces with monograms are rare.

Only two monogram strips of the 2s value with Wide Crown and Wide A watermark (Scott 11) survive, one of which is in the Royal Philatelic Collection, making the strip in the Mossgreen sale a unique item in private hands.

Just three monogram strips are known of the 5s with that watermark (Scott 12), and one of them is in the Royal Philatelic Collection.

Both strips in the auction realized the equivalent of $42,900, including the 22 percent buyer’s premium charged by Mossgreen.