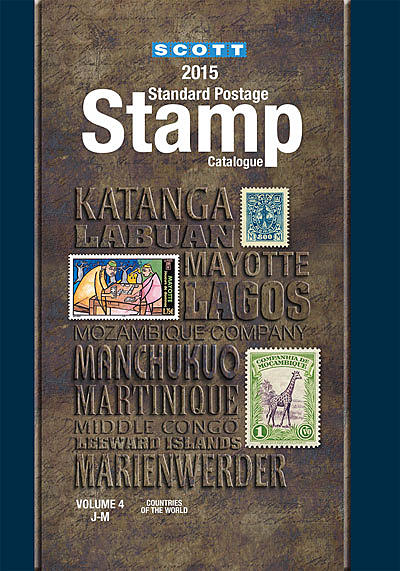 Vol. 4 of the 2015 Scott Standard Postage Stamp Catalogue with countries of the world J-M.

In Vol. 4 of the 2015 Scott Standard Postage Stamp Catalogue, which includes stamp listings for countries of the world J-M, more than 11,000 value changes were recorded.

An extensive review of Japan resulted in more than 2,400 value changes.

“This in-depth review started with the 2014 catalog,” said Scott catalog editor Charles Snee. “We picked up with the mid-2009 postage issues and continued through the back-of-the-book sections. For the most part, values are down — a reflection of a weak economy in Japan, softening of the yen against the dollar, and subdued collector interest.”

The market is showing wide variations in pricing in Jamaica, where 929 value changes were made.

In the classic period, values are up but only modestly, on the order of 10 percent to 15 percent, with some scattered larger increases.

Mixed value changes are seen for Jamaican issues of the 1950s, while values trend down somewhat for stamps of the 1960s to the early 1980s.

More increases than decreases are noted for issues of the late 1980s through the 1990s, while values for stamps issued since 2000 are mostly up.

Malaysia offers a mixed bag of value changes. For issues through the late 1990s, values are down 10 percent or so, but starting in 2001, values for mint, never-hinged stamps show noticeable increases, particularly for various flora and fauna topicals.

Of the 575 value changes for Jordan, the majority are concentrated among the stamps issued before Jordan became an independent state in 1946 (Scott 1-220).

Values rise for both unused and used stamps, but the gains for used stamps are more robust.

Among the modern issues from 1991 to the present, decreases are the norm for unused stamps. For the most part, these drops are slight.

Dramatic increases are recorded for the 1919 issues under German occupation (Scott 1N1-1N13).

Following an in-depth review, approximately 1,450 value changes were made in Luxembourg. While values were down slightly for classic-era issues, recent issues fared better. There were numerous increases for issues during the 1980s through the early 2000s.

There were 2,125 changes made in Mongolia, many of them decreases for stamps issued through the mid-2000s. Overall, the market for Mongolia can be considered weak.

On the editorial side, a new error has been added to the 1964 regular-issue series of Jamaica. The catalog number Scott 223b has been assigned to the 6-penny Butterfly stamp with the denomination omitted. The stamp is valued unused at $2,000.

In Jordan, numerous new minor-number listings have been added for overprint and imperforate errors in the British Mandate section.

The cover price for the printed version of Vol. 4 and each subsequent 2015 Scott Standard Postage Stamp Catalogue is $119.99. Linn’s Stamp News subscribers are eligible for a discount when purchasing online direct from the publisher through the Amos Advantage program.