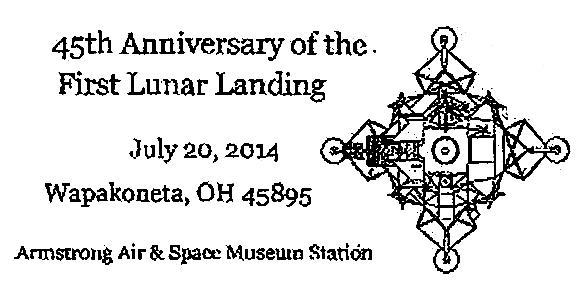 A July 20 postmark from Wapakoneta, Ohio, celebrates the 45th anniversary of the first manned moon landing.

Wapakoneta, Ohio, the birthplace of Apollo 11 astronaut Neil Armstrong, celebrated the 45th anniversary of the first moon landing with a July 20 event during the city’s annual Moon Festival.

A commemorative postmark showing the lunar lander viewed from above was made available at the Armstrong Air and Space Museum in Wapakoneta.

Other events that took place during the weekend included a run, and appearances by astronauts Sunita Williams and Greg Johnson, who signed autographs.

Armstrong and Edwin E. “Buzz” Aldrin landed on the moon July 20, 1969. Many United States stamps have been issued in the ensuing years to mark the historic event.

To obtain this postmark, send requests to the following address: