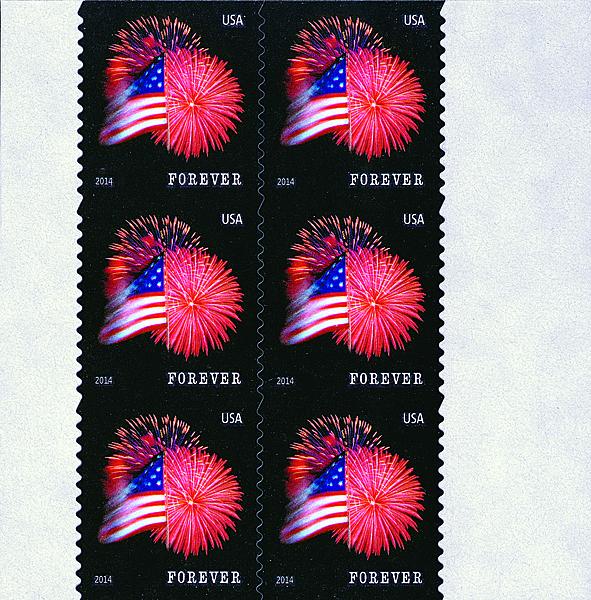 A vertical block of six of the U.S. Star-Spangled Banner coil error stamp from three joined coils that have the horizontal slits separating the rolls omitted.

A vertical block of six of the 2014 United States Star-Spangled Banner forever coil stamps, missing the horizontal slits that normally separate the stamps into individual coil rolls, was reported to Linn’s by reader Robert Thompson of Texas.

Thompson purchased three complete joined coils of 100 in an eBay auction from a seller in Illinois and removed the self-adhesive block of six, which is on its original backing paper.

The block was examined by Linn’s and Scott catalog editors.

This version of the Star-Spangled Banner coil was produced by Banknote Corporation of America for Sennett Security Products.

The Sennett version of the Star-Spangled Banner coil (Scott 4868) was issued March 3.

Recent Sennett coils have been manufactured in a vertical stick format, with the rolls largely separated by horizontal slits but still attached to one another vertically by small paper bridges.

The rolls are shipped to post offices in sticks, and clerks break off individual rolls for retail sale.

The horizontal slitting is absent on the error block pictured here and throughout the coils purchased by Thompson.

The vertical wavy line die cuts on these stamps are normal.

Plate numbers appear three times in each coil from the error find. The plate number is S11111.

The stamps will receive a separate error listing in the Scott catalog, according to catalog editor Charles Snee.

He said the newly discovered major error will be listed in the 2015 Scott Specialized Catalogue of United States Stamps and Covers, scheduled for publication in October.

The error will be described as a block of six, with one pair each from three different coil rolls, horizontally unslit between.

Similar errors also exist for two previous coil stamps produced by Sennett; however, both of these originated from two unseparated coil rolls.

The second is the 2010 Statue of Liberty and Flag forever coil stamps listed as a block of four with one pair each from two different coil rolls, horizontally unslit between (Scott 4489b).