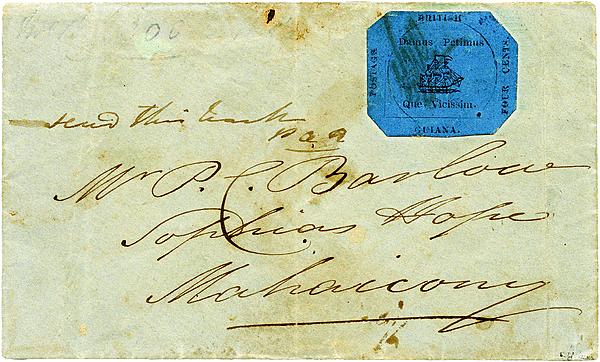 Described by the David Feldman auction firm as the only known cover bearing the British Guiana 4¢ black-on-blue stamp, this 1856 cover sold for $394,000 at Feldman’s June 27 auction in Geneva, Switzerland. 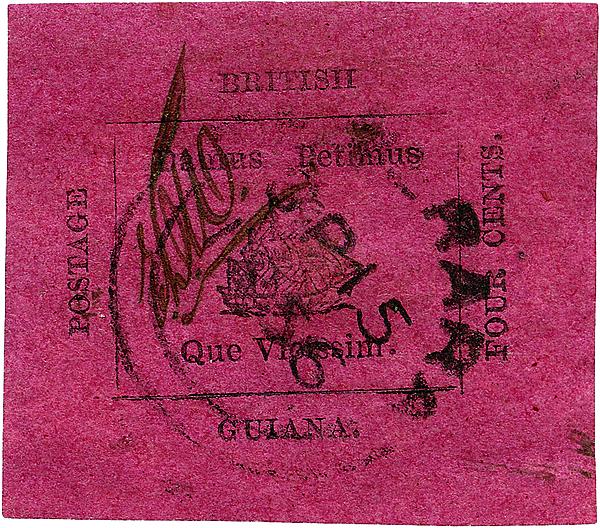 This choice example of the Type 4 variety of the British Guiana 4¢ black on Magenta with jumbo margins and a Demerara datestamp sold for $213,000 in the David Feldman auction, as did a similar but closer cut Type 1 stamp of the 4¢ issue.

While Sotheby’s June 17 auction of the legendary British Guiana 1¢ Magenta for almost $9.5 million made headlines around the world, the sale 10 days later of the rest of John E. du Pont’s British Guiana collection was no less momentous.

Offered by David Feldman in Geneva on June 27, every single lot found a buyer. The total realization (all figures in this article include 20 percent buyer’s premium) amounted to $8.87 million: a stunning five times the combined presale estimates.

The sale was previewed in the March 10 issue of Linn’s Stamp News.

“In 40 years as auctioneer, I have never had the experience where every single lot was [bid] to an astonishing multiple of the original estimate, leaving no lot unsold,” David Feldman said after the sale.

The auction house called the results “off the charts.”

Bidding was so intense that it took some 3½ hours to get through the 131 lots. In some instances, the final result exceeded the presale estimate by a factor of 50 or more.

Asked whether those estimates might have been too conservative, Feldman replied, “I believe our estimates were right and evenly balanced, therefore the higher the multiple the greater the surprise in general.”

One reason for such intense bidder interest was the outstanding nature of the material. In the 1980s, when it was last shown, the collection had garnered a grand prix award, philately’s highest, one of five such prizes du Pont would win for his exhibits.

The sale catalog explained: “The collection was awarded Grand Prix status for good reason. It is comprehensive, studded with great rarities but perhaps, most importantly, the general quality of the difficult and fragile primitive issues is remarkable. An offer like this appears perhaps but one time in a generation.”

Feldman noted that as the sale went on, “underbidders didn’t become discouraged but rather bid more aggressively.”

He said there were bidders from around the world: Europe, the Americas, the Middle East and South Africa.

The sale led off with no fewer than 33 examples of the South American colony’s first issue, a series of crudely printed circular stamps dubbed “Cottonreels” because they resemble the labels on the end of a spool of cotton thread.

When colonial authorities inaugurated an internal postal service in 1850, just the fourth British colony to do so, they set postage rates at 4¢, 8¢ or 12¢ based on distance traveled. A 2¢ rate was added later for mail delivered within the capital, Georgetown.

But stamps were unavailable, so a local printer was asked to step up. The stamps were produced by bending a piece of printer’s rule, essentially a brass wire, into a rough circle and setting the words “British Guiana” and the denomination inside it. Four settings exist of each denomination. They were printed on poor-grade local paper and issued without gum.

When the local postmaster saw the results, he was reportedly so disappointed with the quality that he decided each stamp would have to be countersigned by a postal worker before it would be valid.

Essentially a local issue, the Cottonreels were not well publicized at the time of issue, and it took philatelists decades to reconstruct the circumstances of their making.

Few of the Cottonreels survive. The sale catalog notes that the Royal Philatelic Collection only has 20 examples, while the Tapling collection at the British Library has another 15. Du Pont’s collection outclassed them both.

Without the benefit of gum to lick, senders had to affix the stamps using paste, wax or wafers. Early collectors would inadvertently tear or thin the fragile stamps when removing them from covers, which was common practice in the days before collecting postal history came into its own.

The sale catalog cautioned that the resulting faults are considered normal for the Cottonreels and were therefore not noted in the descriptions.

A cover bearing a large-margin 4¢ black on yellow pelure paper (Scott 3) was another highlight. The letter, postmarked May 9, 1851, includes a list of cattle and once graced both the Dale-Lichtenstein and Burrus collections. Regarded as “one of the major pieces of the issue,” it sold for $262,000.

A lovely pair of the 12¢ black-on-blue Cottonreels (Scott 5), known as the “Ferrary” pair for the legendary collector who once also owned the unique 1¢ Magenta, also brought $213,000, 15 times the presale estimate.

The pair shows the thick and thin frameline varieties of the stamp se-tenant.

Only two examples of the entire Cottonreel issue are known unused, without initials, and one of them has not been seen since it was auctioned in 1935. The other, a 12¢ blue, also fetched $213,000.

By 1852, a supply of stamps printed by Waterlow and Sons had arrived from England.

Although Waterlow would later become one of the premier producers of stamps for the British Empire, in their early days the quality of their work was lacking.

The upright-format 1¢ black-on-magenta and 4¢ black-on-blue stamps they produced (Scott 6, 7) were on delicate paper and, as if to add insult to injury, the colony’s Latin motto, “Damus Petimusque Vicissim” (“We give and expect in return”), was misspelled “Damus Patimus Que Vicissim.”

Many surviving examples show rubbing or cracking of the surface.

A rare used strip of four of the 1¢ in good condition, showing all four subtypes of the design with large margins and fresh color, sold for $36,000.

Waterlow did better with a set of lithographed stamps produced in 1853 (Scott 8-12), which remained in use until 1860. These stamps were represented in the Feldman sale by singles, multiples and postal history.

An irregular block of 31 of the 4¢ pale blue stamp (Scott 10b), said to have been discovered by Sir Charles Cox when he was governor general of the colony, sold for $123,000.

But it was when these stamps temporarily ran out in 1856 that things got interesting, philatelically speaking. A local printer was again asked to provide provisional stamps, one of which, the sole surviving 1¢ black-on-magenta, has lately grabbed so much attention.

The siblings of that 1¢ stamp are the 4¢ black-on-magenta, 4¢ black-on-blue and 4¢ black on so-called blue “sugar paper” that is colored through (Scott 14-16). All three were amply represented in du Pont’s collection. As with the Cottonreels, the 1856 provisionals each come in four minor design varieties.

The sale catalog notes: “The stamps were again probably issued ungummed, and thus subject to various thinnings when removed from covers. Many show archive folds. As the surface of the paper was subject to parts of the design rubbing off, it is not unusual to see examples of this issue with some touching-up, or small parts repainted. This is normal condition, and untouched stamps are very rarely met with. The condition of the du Pont stamps of this issue is far above normal quality.”

A Type 1 example with slimmer margins sold for the same amount, despite being estimated at half the price, making its realization a whopping 52 times the presale valuation. Both stamps were cut square.

Elsewhere in the catalog, there is a sly reference to the famous 1¢ Magenta, which like many of this issue is cut octagonally, as “mutilated.”

A cover to London franked with an octagonal 4¢ black-on-magenta and bearing a Feb. 7, 1856, datestamp was called the earliest known use of this issue. It sold for just under $115,000.

The 1856 provisionals on blue paper are substantially scarcer than those on magenta.

A used 4¢ black-on-blue, said to be one of just four known cut square, fetched an impressive $279,000. It once belonged, together with the 1¢ Magenta, in the fabled collections of both Ferrary and Hind.

Wrapping up the sale were a few items from later issues, Officials, prestamp postal history and a run of British stamps and covers used in the colony.

An 1856 cover to Britain, franked with a 6-penny embossed stamp (Great Britain Scott 7) was described as “probably the earliest GB cover from South America.” Sent via steamer to Scotland, it sold for $60,000.

The lavish sale catalog, sure to become a sought-after reference on British Guiana’s stamps, is at www.davidfeldman.com/wp-content/uploads/2014/06/185_British_Guiana_WEB.pdf.