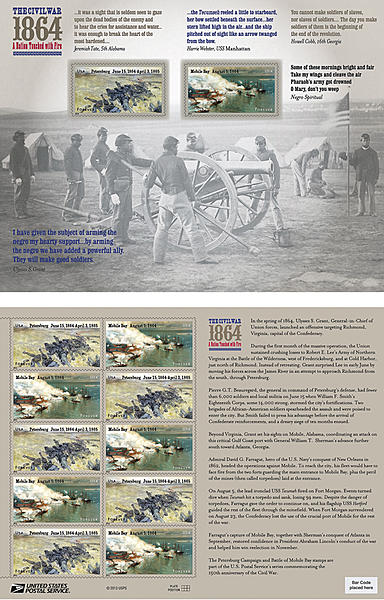 Two United States nondenominated (49¢) Civil War 1864 commemorative forever stamps will be issued July 30 at the battle sites in Petersburg, Va., and Mobile, Ala.

United States stamps commemorating the 150th anniversaries of the 1864 Civil War battles at Petersburg and Mobile Bay will be issued July 30 at both battle locations.

The stamps, issued together in a pane of 12, comprise the fourth set in the U.S. Postal Service’s current Civil War commemorative series.

The double-sided pane has two stamps on the front and 10 on the back.

The first-day ceremony for the Petersburg stamp will begin at 10 a.m. at the Petersburg National Battlefield, 5001 Siege Road, Petersburg, Va. The ceremony will be held outdoors, next to the crater.

Both ceremonies are open to the public.

The stamps comprise the fourth set in a five-year series commemorating significant Civil War anniversaries. Two U.S. stamps are being issued in the series each year from 2011 to 2015.

The Petersburg stamp design is based on an 1892 reproduction of a painting by J. Andre Castaigne. It shows a scene that involved the 22nd United States Colored Troops regiment at the beginning of the Petersburg campaign.

A painting by artist Julian Oliver Davidson, originally published in 1886, was used for the Mobile Bay stamp. It has a scene of David G. Farragut’s fleet during the battle.

The selvage on the front of the pane reproduces an 1864 photograph of Battery A, 2nd U.S. Colored Artillery (Light), Department of the Cumberland.

The text on the 10-stamp reverse side of the pane reads:

In the spring of 1864, Ulysses S. Grant, General-in-Chief of Union forces, launched an offensive targeting Richmond, Virginia, the capital of the Confederacy.

During the first month of the massive operation, the Union sustained crushing losses to Robert E. Lee’s Army of Northern Virginia at the Battle of the Wilderness, west of Fredericksburg, and at Cold Harbor, just north of Richmond. Instead of retreating, Grant surprised Lee in early June by moving his forces across the James River in an attempt to approach Richmond from the south, through Petersburg.

Pierre G.T. Beauregard, the general in command of Petersburg’s defense, had fewer than 6,000 soldiers and local militia on June 15 when William F. Smith’s Eighteenth Corps, some 14,000 strong, stormed the city’s fortifications. Two brigades of African-American soldiers spearheaded the assault and were poised to enter the city. But Smith failed to press his advantage before the arrival of Confederate reinforcements, and a dreary siege of ten months ensued.

Admiral David G. Farragut, hero of the U.S. Navy’s conquest of New Orleans in 1862, headed the operations against Mobile. To reach the city, his fleet would have to face fire from the two forts guarding the main entrance to Mobile Bay, plus the peril of the mines (then called torpedoes) laid at the entrance.

On August 5, the lead ironclad USS Tecumseh fired on Fort Morgan. Events turned dire when Tecumseh hit a torpedo and sank, losing 94 men. Despite the danger of torpedoes, Farragut gave the order to continue on, and his flagship USS Hartford guided the rest of the fleet through the minefield. When Fort Morgan surrendered on August 23, the Confederacy lost the use of the crucial port of Mobile for the rest of the war.

Farragut’s capture of Mobile Bay, together with Sherman’s conquest of Atlanta in September, restored confidence in President Abraham Lincoln’s conduct of the war and helped him win reelection in November.

The Petersburg Campaign and Battle of Mobile Bay stamps are part of the U.S. Postal Service’s series commemorating the 150th anniversary of the Civil War.

Press sheets, both with and without the die cuts that separate individual stamps, were produced in a quantity of 1,500 with die cuts and 2,500 without. The sheets consist of six panes of 12 stamps and sell for $35.28 each.

The U.S. Postal Service will offer a pictorial first-day cancel and a digital color postmark for the Civil War 1864 stamps.

Technical details and first-day cancel ordering information for these stamps: