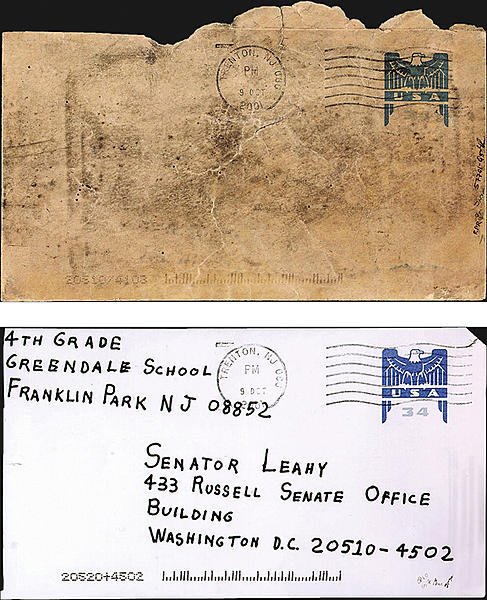 The 34¢ stamped envelope sent to Sen. Tom Daschle in October 2001 that contained anthrax is shown at top after decontamination. The decontamination process of the envelope to remove the anthrax resulted in the extreme change of appearance. A similar envelope photographed before decontamination is shown at bottom. Image courtesy of the Federal Bureau of Investigation and the National Postal Museum.

Artifacts from two of the United States’ most horrific mail crimes — the deadly 2001 anthrax mailings and the Unabomber’s attacks with mail bombs — are now on display at the Smithsonian’s National Postal Museum in Washington, D.C.

The items are part of an exhibit on the U.S. Postal Inspection Service that opened June 27.

Among the items in the “Behind the Badge” exhibit is the anthrax-laden 2001 letter mailed to Senate Majority Leader Tom Daschle, D-S.D., which launched what became a major investigation into the letters that were believed to have been mailed by a disgruntled Army researcher.

The exhibit includes a Princeton, N.J., mail collection box where the suspect letters were mailed and a U.S. flag discolored from decontamination efforts inside Washington’s Brentwood mail-processing plant where the letters were handled.

Two postal workers there died from inhaling anthrax spores that came from the envelopes that were sent to Sen. Patrick Leahy, D-Vt., as well as Daschle.

Also on display are the handcuffs that were used on Ted Kaczynski when he was arrested in 1996 at his remote Montana shack. He had terrorized the mail service since 1978 with a series of mail bombs.

These items have never been on public display, according to museum spokesman Marty Emery.

The exhibit also contains a section on the role postal inspectors have played in detecting counterfeit stamps.

Organized crime in New Jersey was the source in 1970 of fake 6¢ Eisenhower stamps, the exhibit notes. A full pane of 100 of these bogus stamps is on display.

In 1995, inspectors seized sheets of bogus 50¢ Lucy Stone stamps, a partial pane of which is on display.

Additional details about the anthrax mailings and the Unabomber are available at the National Postal Museum’s website, www.postalmuseum.si.edu/behindthebadge/index.html.

The museum told Linn’s that the exhibit is a permanent display.