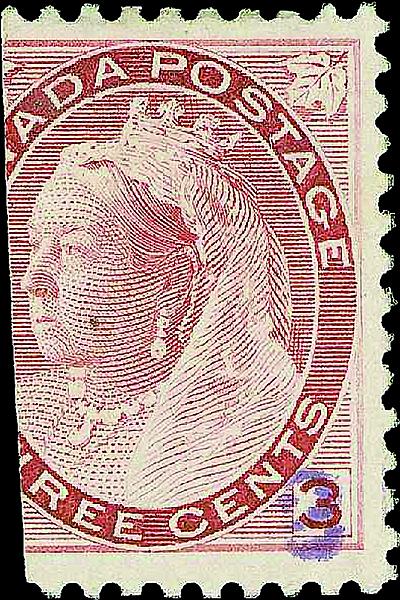 One of the two rare unused Canada’s 1899 Port Hood provisional surcharged bisects auctioned as a set during the May 29 Eastern sale in Halifax, Nova Scotia. The set of two stamps sold for $27,900.

Eastern Auctions held a sale in Halifax, Nova Scotia, May 29-30, featuring classics from the “Montclair” collection, whose owner sought to assemble one of every Canadian stamp variety in mint condition.

A mint, original-gum 1851 3-penny vermilion Beaver on handmade laid paper (Scott 1) was touted as a rare fault-free example of Canada’s first stamp. Indeed, the sale catalog noted many famous-name collections of the past that lacked this stamp in such condition.

It sold for about $72,000, including the 15 percent buyer’s premium charged by Eastern on all lots.

The 1899 provisional bisects, in which the 3¢ carmine value of the Queen Victoria Numeral issue was cut into one-third and two-third pieces and surcharged “1” or “2” by hand (Scott 88B, 88C), were offered as a set.

Produced at the Port Hood, N.S., post office when stocks of those values ran out, the stamps are normally only found postally used on cover. Certified and backstamped as genuine, the rare unused duo sold for $27,900. The 2¢ bisect (two-thirds of a 3¢ stamp) is pictured here.

A mint sheet-margin example of the 1989 $1 Runnymede Library stamp with engraved inscriptions inverted in error (Scott 1181a) sold for about $9,100, while a comparable error on the $2 Provincial Normal School stamp of the same set (1376b) brought $5,600.