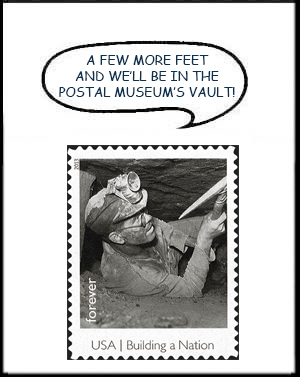 No doubt there is much justified angst in the stamp collecting community over self-adhesive stamps that won't soak. Several entries in the July cartoon caption contest emphasized this problem.

Scott Murphy of Newport Beach, Calif., represents those upset collectors with this line: "I used to be able to just soak the stamps off envelopes for my collection."

Many also used the search for the upright $2 Jenny Invert as their theme. Glen Anderson from St. Paul, Minn., dreams in this vein with, "If I keep pounding away I just might find that upright Jenny!"

Two other themes received multiple entries. First is the story our parents or teachers told us about digging until we reached China. The other is riffs on the country and western song Coal Miner's Daughter. Steve Kotler of San Francisco, Calif., turned this around to "It's about time Loretta made the story of my life: Coal Miner's Daughter's Father!"

There were many excellent entries, especially those with philatelic lines. The winning entry, shown in the bubble on page 6 was sent by Emmanuel Atsalinos of Silver Spring, Md. What collector wouldn't relish that opportunity.

On the nonphilatelic side, the winner is Brian Smith of Muncie, Ind., with "Forever is how long it's going to take me to get clean!"

Both winners will receive Linn's Stamp Identifier published by Amos Media, or a 13-week subscription to Linn's (a new subscription or an extension). The book has a retail value of $12.99. Here are a few of the runners-up:

"I'm thrilled to be on a stamp, even if it's just a miner variety" from Gary Kufchak of Wadsworth, Ohio.

"Politics is indeed a dirty business!" by Edgar Dunlap of Gainesville, Ga.

"They told me I might find some Dennison hinges in here," sent by Aubrey Dunne of La Mesa, Calif.

"This is a good place to hide my newly acquired British Guiana Penny Magenta!" from Tim Ryan of San Francisco, Calif.

"Two more tons and I can buy an imperf Express Mail press sheet!" by William David Webb of Jenkintown, Pa.

"I'm between a rock and a hard place," sent by Gilbert Schaye of New York, N.Y.

"Humbug! The realtor said this house had a dry basement!" by Charles Wales of Ashburn, Va.

"I found the light at the end of the tunnel — it's me!" sent by Thomas and Laura Tomaszek of Cedar Rapids, Iowa.

The next cartoon caption contest will be announced in the Sept. 8 Linn's.