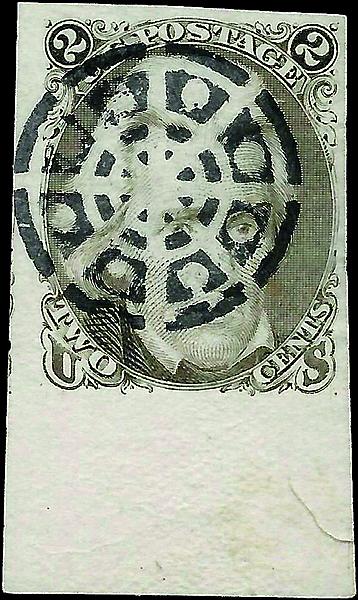 Figure 3. This olive-green plate proof of the Black Jack issue on India paper is struck with an experimental black cancel. 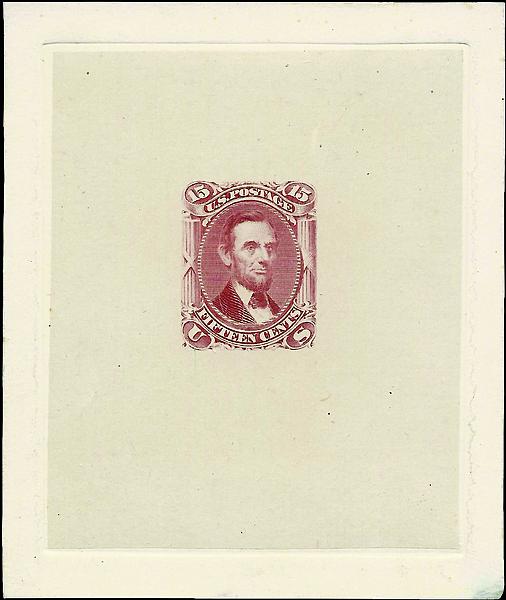 Figure 1. A dark red trial color die proof of the 1866 15¢ Abraham Lincoln memorial issue on India paper and die sunk on card blotter. Twelve colors other than the issued black were considered; these proofs provide a different perspective of the issue.

The only difference between a die proof and trial color die proof is color.

A die proof will be pulled in the color chosen for the soon-to-be-issued stamp.

A trial color die proof represents a color that was rejected by the United States Post Office Department.

At times the POD would request that the bank note company provide several different color trials of an approved die. This was the case with the 15¢ Lincoln stamp issued in 1866 and produced by the National Bank Note Co.

Today we consider this black stamp a mourning issue for our fallen president. But in the haste by the Post Office Department to get a memorial issue into production, 12 colors were considered other than black. There is something very interesting about the dark red trial color example on India paper shown here in Figure 1 (Scott 77TC1af).

As stated previously, both die proofs and trial color die proofs come from the finished approved production die. A production die is the final hardened state of the die, and it might contain a die number under the engraved stamp design and the imprint of the bank note company.

Die proofs of the 15¢ Lincoln stamp carry just the imprint of National Bank Note Co. beneath the engraved image of the stamp.

You will not find the imprint on the Lincoln trial color die proofs. These colors were pulled from an unfinished state of the die.

In the rush to get this stamp approved and into production, these trial color die proofs may have just been pulled before the die was hardened in an effort to save time. However, there are no design differences between the trial color and finished die proofs.

Trial color plate proofs follow the same protocol as the trial color die proofs, except that they are pulled from finished plates ready for production. Shown in Figure 2 are four examples of the 1863 issue that we have come to know as the 2¢ Black Jack, modeled after the John W. Dodge portrait of President Andrew Jackson (Scott 73TC3).

Before the color black was chosen, 10 different colors were pulled from the original production plate. Most of the colors were rather pastel in nature, including the examples shown here.

There is another very interesting aspect to the Black Jack trial color plate proofs.

Examples are known with what has been deemed an “experimental” cancel. The example shown in Figure 3 is struck on the olive green proof variety (Scott 73TC3d).

Consider that this stamp was issued July 1, 1863, and the POD was already looking for a production or post-production method for rendering a stamp so it could not be reused.

This interesting complex geometric “killer” has been recorded on a handful of different trial color plate singles, pairs and at least one block of four.

It should also be noted that this “killer” device did see service in the main post office in Washington, D.C., during the time of the Black Jack issue.

My records list three different covers, and I am quite sure that there are others out there waiting to be found.

As a reader you now have the basics on essays and proofs as covered in my first three columns. From here on, I hope you will find the topics especially interesting.

The next several columns will cover the different designs, concepts and patents all geared to prevent the reuse of the postage stamp. My next column will tell the story of George Bowlsby’s 1¢ 1861 issue coupon essay patent, one of the most popular and interesting essays in all of United States philately.