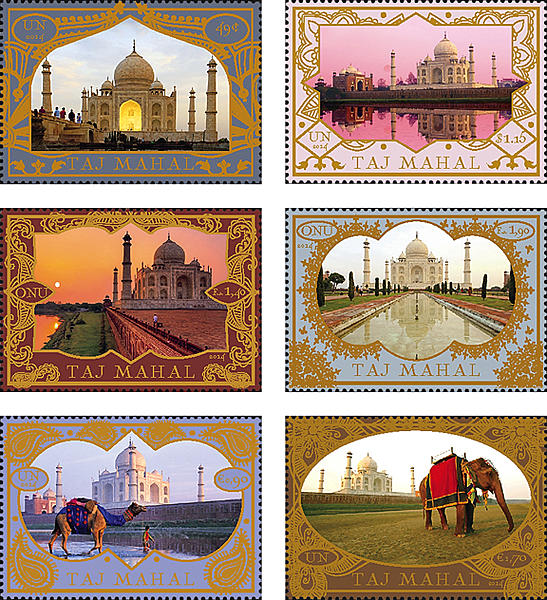 Six stamps from the United Nations Postal Administration reflect the beauty of the Taj Mahal in Agra, India. The mausoleum was inscribed on UNESCO’s World Heritage list in 1983.

The Taj Mahal, considered one of the most beautiful buildings in the world, is pictured on six stamps issued July 16 by the United Nations Postal Administration.

The UNESCO website provides a description of the structure: “An immense mausoleum of white marble, built in Agra [India] between 1631 and 1648 by order of the Mughal emperor Shah Jahan in memory of his favourite wife, the Taj Mahal is the jewel of Muslim art in India and one of the universally admired masterpieces of the world’s heritage.”

The stamps, two for each UNPA post office, reproduce photographs of the Taj Mahal.

Animals are included in the photographs shown on the two stamps for use from the post office at the International Vienna Center in Vienna, Austria.

The €0.90 stamp pictures a man leading a camel in Yamuna River beside the Taj Mahal.

An elephant saddled for a ride is grazing near the Taj Mahal on the 01.70 stamp.

In the almost two decades it took to complete the mausoleum, approximately 1,000 elephants carried material for the 22,000 laborers.

UNESCO said: “ … For its construction, masons, stone-cutters, inlayers, carvers, painters, calligraphers, dome builders and other artisans were requisitioned from the whole of the empire and also from Central Asia and Iran. Ustad-Ahmad Lahori was the main architect of the Taj Mahal.”

The two stamps for use from the post office at U.N. headquarters in New York City are denominated 49¢ and $1.15.

A southern view of the white marble tomb and the four minarets surrounding it is featured on the 49¢ stamp. The large white dome in the center of the tomb is approximately 115 feet tall. The minarets are 130 feet tall.

The Taj Mahal’s main chamber houses the false tombs of Mumtaz Mahal, the beloved wife whose death inspired the building of the mausoleum, and Shah Jahan. The actual graves are at a lower level.

The photograph on the $1.15 stamp shows the Taj Mahal and its mosque reflected in the river, all bathed in a rosy glow.

The website of National Geographic said: “The mausoleum’s clean white marble shifts in color and tone to match the mood of the world outside — a transformation so enchanting that it’s worth lingering to gaze at the building in different conditions, such as the rosy glow of dawn or the magical light of a full moon.”

The sky is filled with orange hues on the 1.40-franc stamp for use from the post office at the Palais des Nations in Geneva, Switzerland.

The 1.90fr stamp shows the tomb and its reflecting pool.

Each stamp measures 50 millimeters by 35mm and is perforated gauge 13.

Lowe-Martin of Canada printed the stamps by offset with gold foil in sheets of 20.

Prestige booklets with stamps, text and illustrations also will be issued in the following quantities: 18,000 of the U.N./Vienna booklet, and 14,000 each of the U.N./New York and U.N./Geneva booklets.