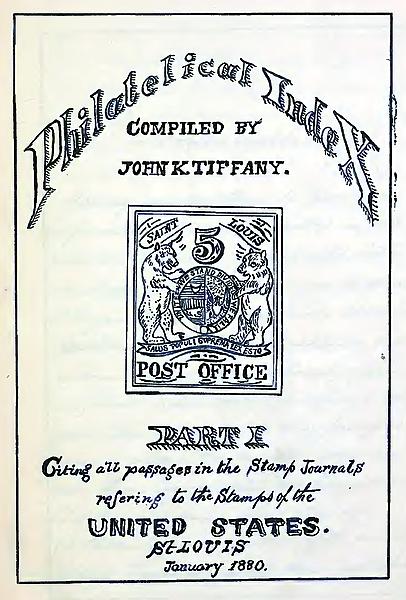 In a recent column, I wrote that, by the 1880s, the boys who began collecting stamps in the first generation after the appearance of the Penny Black — the world’s first postage stamp, issued by Great Britain in 1840 — were becoming middle-aged men and organizing the hobby along lines we would recognize today.

One of these men was John Kerr Tiffany of St. Louis.

In addition to his study of United States stamps in general, and the St. Louis postmaster’s provisionals in particular, Tiffany amassed the largest collection of philatelic literature in his time. Much of his library is now at the British Museum, having been donated there by the Earl of Crawford.

The first is his Philatelical Library of 1874. That volume sought to catalog all titles “designed, in whole or part, for stamp collectors.” It includes journals, which are listed by their titles only.

Philatelical Library is rare; only 150 copies were privately published by Tiffany.

About four years ago, the National Postal Museum Library digitized its copy and made it freely available for download on the web at https://archive.org/details/philatelicallibr00tiff. Optical character recognition (OCR) software was used to make the printed text fully searchable.

At the same time, the NPM library also digitized its other outstanding Tiffany treasure: his unpublished manuscript, Philatelical Index, dating from 1881.

The handwritten title page of Philatelical Index is shown in Figure 1.

The manuscript is, in a way, an extension of Philatelical Library. It updates the list of journal titles, but also attempts an index by subject of the articles found within. It was never published (a recent article by Brian Birch in Philatelic Literature Review argued that it was Tiffany’s colleague, Schuyler Bradt, who published the first philatelic index in 1886).

By 1913, the Tiffany manuscript was owned by William R. Ricketts, who exhibited it at that year’s international stamp show in New York. It was later collected by George T. Turner, one of my predecessors at the Smithsonian Institution, and was included in the section of his library that he willed to the institution upon his death in 1979.

Up to now, Philatelical Index has not been searchable because OCR software does not work for handwritten manuscripts; these need to be transcribed by humans.

Recently, however, the Smithsonian Libraries selected it for a beta project that allows the public to volunteer online and transcribe documents owned by the Smithsonian Institution.

As of this writing, the transcription of Philatelical Index is about halfway complete.

A total of 22 volunteers, some of them members of St. Louis-area stamp clubs, are contributing to the project.

You can peruse what has already been done by visiting https://transcription.si.edu/project/6676.

To sign up as a volunteer and receive a tutorial on the project, contact National Postal Museum librarian Baasil Wilder at wilderb@si.edu.

A glimpse of the project website is shown in Figure 2.

Whatever Tiffany’s reasons were for not publishing Philatelical Index, he never could have imagined the technology that, 130 years later, would make it available to researchers for the first time.

Daniel Piazza is a Smithsonian curator of philately. The National Postal Museum is devoted to presenting the colorful and engaging history of the nation’s mail service and showcasing one of the largest and most comprehensive collections of stamps and philatelic material in the world. It is located at 2 Massachusetts Avenue N.E., Washington, D.C., across from Union Station. For more information, visit the museum web site at www.postalmuseum.si.edu.