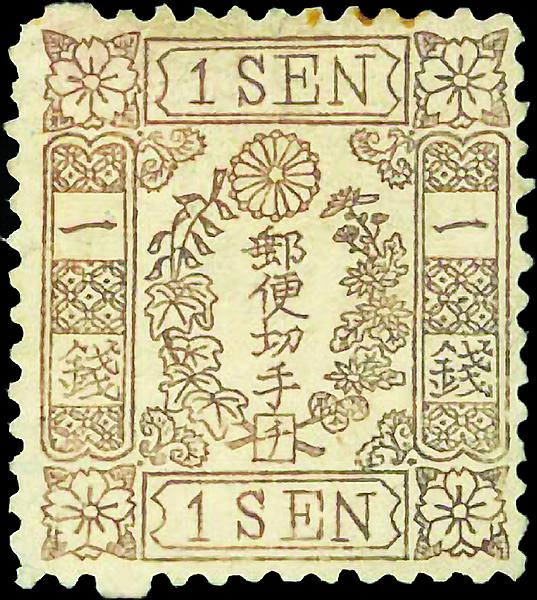 The April Dynasty sale included this unused 1875 1-sen Cherry Blossom stamp from Japan with syllabic 8 character, which sold for $22,200.

Dynasty Auctions offered this early 1870s “urgent mail” cover from Osaka to Tokyo from the Michael Ruggiero collection of Japan. The cover sold for the equivalent of $29,600.

Dynasty Auctions, the Hong Kong arm of the Daniel F. Kelleher firm, held a series of sales April 11-13 that included the Michael Ruggiero collection of Japan.

Ruggiero, a U.S. Navy veteran who died in 2013, took advantage of his stationing to Japan in the 1960s to befriend Soichi Ichida, one of the deans of classic Japanese philately, who became Ruggiero’s mentor as he built his gold award-winning collection in the 1970s and 1980s.

A member of the Collectors Club of New York and a renowned expert on Japanese stamps, Ruggiero acquired many of the best items in his collection in the 1950s and 1960s, before Japan became a “hot” country philatelically. As a result, many of the stamps in the Dynasty sale were crossing the auction block for the first time.

An early 1870s “urgent mail” cover from Osaka to Tokyo, bearing a combination of the imperforate 500-mon yellow-green stamp from Japan’s first issue (Scott 4c) and the roughly perforated 1-sen and 2s stamps of the second issue (6, 7) was called a “great rarity and frontline exhibition piece.” It sold for the equivalent of $29,600, including the 15 percent buyer’s premium Dynasty charges on all lots.

An unused 1875 1s Cherry Blossom stamp (Scott 41) showing a syllabic 8, or “chi” in Japanese, with original crackly gum, was described as “a magnificent example of one of the rarest classic issues.”

The syllabic characters tucked away in the lower portion of the design of some early Japanese stamps are akin to the plate numbers on classic British stamps, providing a way for postal authorities to keep control over the number of stamps printed. Some of the syllabic characters are scarce.

In the general portion of the Dynasty sale featuring stamps of China and other Asian countries, an unused original gum $5-on-3¢ “Red Revenue” stamp with the overprint shifted downward (a variety of China Scott 85) realized $89,000.