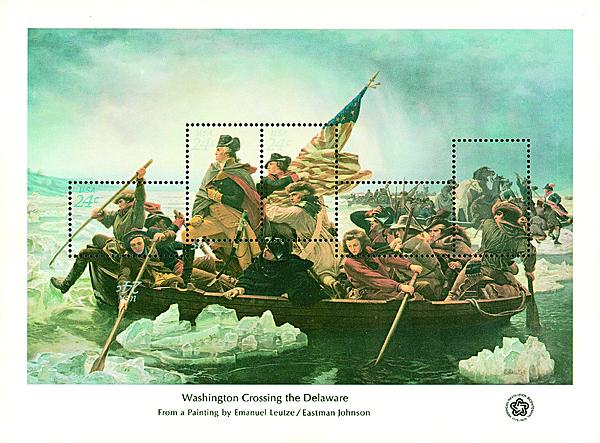 In its July 18-19 auction, Dutch Country Auctions of Wilmington, Del., will offer a newly identified example of the 1976 24¢ Bicentennial souvenir sheet with the denomination inscriptions omitted on two stamps.

Those denominations, which should appear at upper right on the fourth and fifth stamps, instead appear inverted directly below the first and second stamps.

The error (Scott 1688k) is listed in the auction with an estimate of $40,000. That figure matches the value, in italics, assigned to the souvenir sheet error in the 2014 Scott Specialized Catalogue of United States Stamps and Covers.

Full details of the error discovery were published in Linn’s issue of April 28.

Previously there was just one example of this specific error known, but the example offered by Dutch Country is the second to turn up.

Dutch Country Auctions former owner Keith Marsh examined the souvenir sheet when it was consigned to the firm and discovered that it is the rare variety.

The souvenir sheet has been authenticated by Professional Stamp Experts, receiving a certificate dated March 23 and identifying it as Scott 1688k. The certificate additionally states, “it is a genuine unused, o.g. [original gum], never hinged, pane of five, the USA / 24c of d and e inverted, with a small gum disturbance not affecting any stamp.”