Bisects allowed but not approved for use in the United States 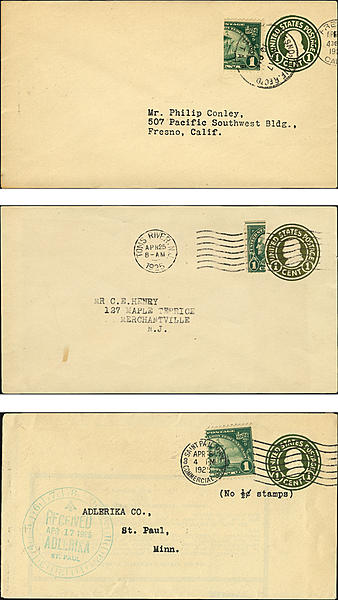 These three bisected stamp covers shown here resulted from a lack of stamps or surcharged stamped envelopes to implement a new 1½¢ third-class rate in 1925. Such use was approved by the local postmaster in these cases but not by postal head

The use of bisected stamps has a long and not entirely honorable history in the United States.

In the early days, bisected stamps are seen frequently enough among U.S. stamp issues to be recognized by the Scott Specialized Catalogue of United States Stamps and Covers.

After 1879, there are no such listings. It isn’t that bisects were not being used, but they were explicitly banned by regulation.

The thought behind this was that it was too easy to cut apart a stamp that had a cancellation that did not cover the entire stamp, and then use the uncanceled portion as valid postage on a new envelope.

There is one period where bisects were sanctioned.

This was the motivation for the issuance of the ½¢ Nathan Hale stamp (Scott 551) on April 4 of that year.

How quickly and how widely these ½¢ stamps were distributed is a question mark, but it is evident that they did not reach all of the smallest post offices in time for the April 25 date.

To help meet the need, surplus stocks of 1¢ Benjamin Franklin envelopes were surcharged 1½¢.

I have seen covers from three locations where neither the ½¢ stamps nor the 1½¢ stationery were available in time, and local postmasters either approved the use of bisected stamps or winked at their use.

Three covers, all 1¢ Benjamin Franklin envelopes, with such bisect use are shown here.

On these covers, the bisects were used from Fresno, Calif. (used early on April 17); Toms River, N.J.; and St. Paul, Minn.

Each is supported by a letter from the postmaster stating that they had temporarily permitted the use of bisects.

Two of these covers are franked with a stamp cut in half.

The third cover has a stamp split by perforations. That cover is of particular interest to me.

The president of Adlerika Co. in St. Paul was an ardent philatelist. He arranged the addition of the date information to the third class mailer date stamp — which did not require it — then confirmed it with a company received handstamp.

Because postal headquarters in Washington, D.C., never approved these stopgap measures for the new postage rate, the Scott catalog editors refuse to provide a listing for these bisects.

But these bisects have at least semiofficial blessing, and are eminently collectible.