Editor's Insights: British Guiana 1856 1¢ Magenta about to be auctioned 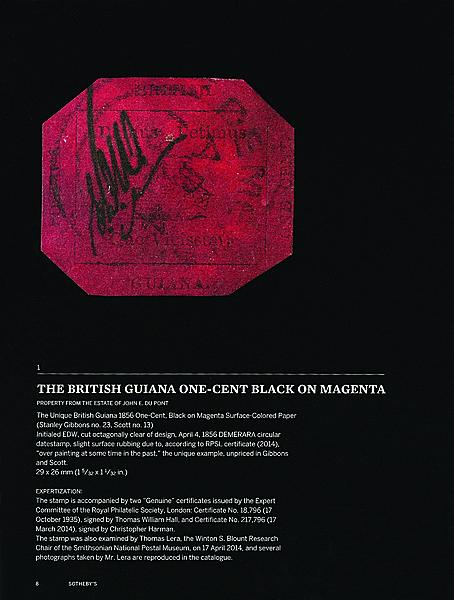 A page from Sotheby’s auction catalog for the June 17 sale of the British Guiana 1856 1¢ Magenta. A brief description of the stamp is provided below an enlarged image of it. Often called the world’s most famous stamp, it has a presale

The June 17 auction of the legendary 1856 1¢ Magenta of British Guiana, often described as the world’s most famous stamp, is almost upon us.
Matthew Healey, Linn’s correspondent in New York City, where the sale is to take place, has additional details in his story on page 1 of this issue.

I was reminded of the stamp’s date with destiny when the slim single-lot auction catalog from Sotheby’s arrived in the mail a few days ago.

For potential bidders with the financial means to afford one of the hobby’s most storied crown jewels, the catalog provides all the necessary vitals concerning the stamp’s provenance.

For the rest of us, the volume is an indispensable reference work befitting a stamp that most collectors have known about from their earliest days.

Pictured nearby is the lot description from the catalog, which features an oversize image of the stamp, along with Sotheby’s terse description: “Initialed EDW, cut octagonally clear of design, April 4, 1856 DEMERARA circular datestamp, slight surface rubbing due to, according to RPSL certificate (2014), ‘over painting at some time in the past,’ the unique example, unpriced in Gibbons and Scott.”

The following page in the catalog offers a list of the previous owners that reads like a who’s who of philately.

The stamp first passed through the hands of Andrew Hunter, described in the catalog as the “original recipient of the mailed stamp.”

Also listed in the auction catalog are the various exhibitions where the stamp made an appearance, including the 1986 Ameripex show in Chicago, where the stamp was the centerpiece of du Pont’s grand prix-winning exhibit of British Guiana.

In the Scott catalog, the listing for the stamp has for many years shown a dash in the used column.

If the stamp is in fact sold, it is likely that the realization, whatever it might be, will inform the Scott editors’ decision to assign a value to the stamp.

At this point, perhaps the biggest question to be answered is: Who will buy the stamp?

While there are a small number of stamp collectors with pockets deep enough to add the 1¢ Magenta to their collection, it is quite possible that the ultimate owner will not be a stamp collector. There are collectors who seek nothing but the finest or rarest, whether it be an impressionist masterpiece, a flawless gemstone or a unique stamp.

Sotheby’s has established a presale estimate of $10 million to $20 million — a range substantially above the $935,000 that du Pont paid when he purchased the stamp in 1980.

A colleague of mine, with decades of experience in the world of high-end philatelic auctions, recently told me that he doubts the stamp will sell for $10 million or more.

Fair enough, but I’d say all bets are off when it comes to this particular stamp.
In the closing statement in the catalog, Sotheby’s seems to agree: “The British Guiana One-Cent Black on Magenta is returning to the marketplace after its longest absence since it was in the Ferrary collection. ...

“All that can be known until the auctioneer gives fair warning is that the winning bidder will own the world’s most famous and valuable stamp.”