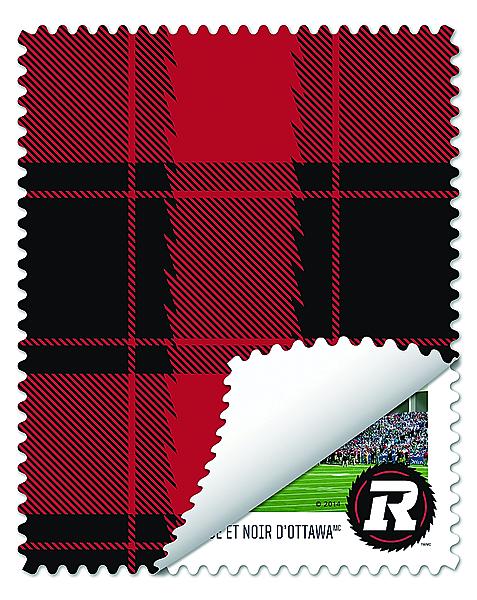 Two Canadian nondenominated (85¢) Ottawa RedBlacks permanent stamps will be issued June 19. The coil stamp features the team logo, and the other will show a Canadian football hero, according to Canada Post.

The return of the Canadian Football League to the city of Ottawa will be celebrated June 19 with two new stamps from Canada Post.

The team will play at its new stadium at Lansdowne Park. The first home game is set for July 18 against the Toronto Argonauts.

Ottawa has been without a CFL team since the Ottawa Renegades were disbanded prior to the 2006 season.

A coil stamp in rolls of 50 depicts the Ottawa RedBlacks team logo. The commemorative stamp in a booklet of 10 shows a Canadian football hero, according to Canada Post. Both are nondenominated (85¢) permanent-rate stamps.

The stamp designs will be revealed June 19, but Canada Post provided a teaser graphic, shown here, on its website.

The stamps are believed to be similar in style to those honoring eight Canadian Football League teams that were issued in 2012 (Scott 2558-2576).

The new stamps were designed by the firm Bensimon Byrne. Additional details about the printer, print quantities and design were not made available by Canada Post as of mid-June.

The official first-day cover will bear a postmark from Ottawa, Ontario, and is Canada Post item 413937131.