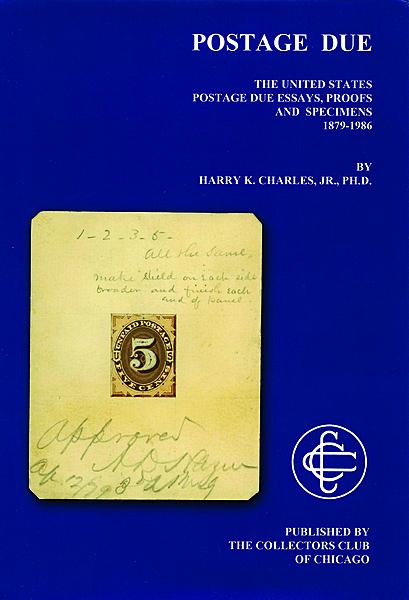 Harry K. Charles has pursued United States postage due stamps with passion and zeal for many decades.

Of particular interest to Charles are the myriad essays (proposed designs), proofs (trial impressions before actual stamp printing) and specimens that form the developmental foundation upon which the issued stamps rest.

His meticulous work has now been brought between the covers of a splendid new book from the Collectors Club of Chicago: Postage Due The United States Postage Due Essays, Proofs And Specimens 1879-1986.

Although relegated to the back of the book in stamp catalogs, postage due stamps have a long, fascinating history.

France issued the first postage due stamps in 1859. A small number of countries followed suit during the next 17 years.

Charles begins his magnum opus with a brief review of the development of postage stamps. He also illustrates the five different designs of U.S. postage due stamps.

Chapters 2 through 8 discuss in chronological order the various essays and proofs of the Large Numeral stamps and the subsequent Small Numeral postage dues printed by the Bureau of Engraving and Printing. The last three designs are explored in chapter 9. Charles notes that emphasis is placed on the designs introduced in the early 1930s.

Postage due specimens are discussed in chapter 10, and the final chapter is devoted to the essays and proofs of the parcel post postage due stamps.

Readers desiring additional historical background and detail should consult the 18 appendices at the end of the book.

Not many collectors wade into the specialized world of essays and proofs, but Charles has done a favor for both novice and expert alike by making his subject approachable.

Charles uses clear language to guide the reader, and the copious illustrations show off the beauty of the collectible objects to great advantage.

The result is an engaging work that will capture the attention of the seasoned collector and not overwhelm the newcomer.

If you are new to postage due stamps, start with the first chapter, which provides a simplified history of the subject.

To get a handle on the language associated with essays and proofs, peruse appendices C and D. They explain, respectively, what essays and proofs are and the various paper types used to produce them.

With this preparatory reading behind you, the rest of the book will be all that more enjoyable and educational.