Imperforate U.S. stamps finding their way into the mailstream 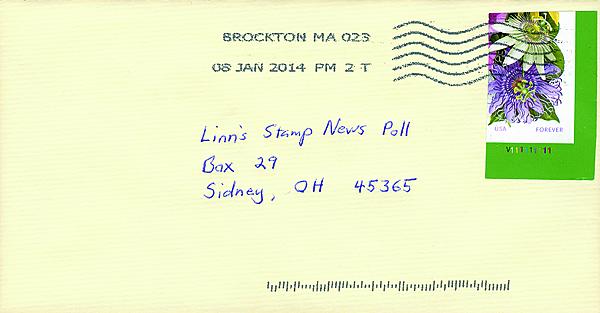 Figure 3. Marginal selvage at right and bottom clearly identifies the United States 2013 La Florida forever stamp on this cover as one that came from an uncut press sheet without die cuts. 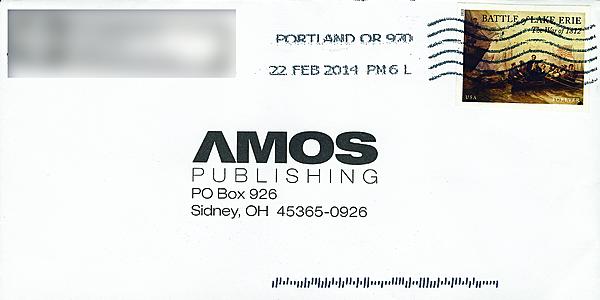 Figure 2. This cover, postmarked Feb. 22, 2014, is the most recent example of a postally used imperforate stamp from a press sheet without die cuts that the author has found. 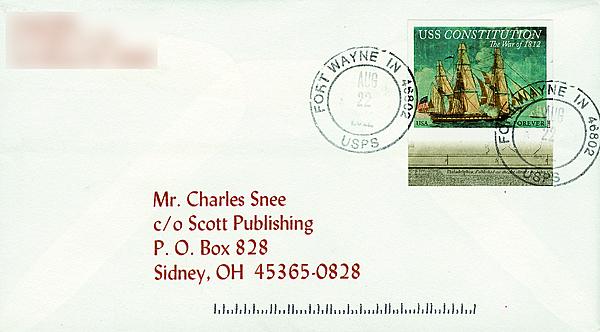 Figure 1. An imperforate 2012 War of 1812 Bicentennial stamp, from an uncut press sheet without die cuts, was used to mail this cover to the author in August 2012. The stamp shows the USS Constitution.

Not long after that, I began searching for postally used examples of imperforate stamps cut from these sheets.

As of mid-March, I had acquired 28 such covers; all of them are addressed either to Linn’s Stamp News, Scott Publishing Co., or Amos Publishing, which owns both Linn’s and Scott.

This total suggests that collectors (and some dealers) are cutting up the imperforate press sheets and using them for postage in sufficient numbers that it shouldn’t be too hard to acquire a cover franked with one.

Nonetheless, you need to be diligent and patient in your search.

Of course, I have it easier than most because of my access to the mail that Amos Publishing and its divisions receive each day.

Every other week or so, I sort through hundreds of subscription-reply envelopes looking for the unusual.

The imperforate stamps from press sheets are the latest varieties that I cull from the pile and set aside.

An important reminder: stamps from uncut press sheets, both with and without die cuts, are not listed with numbers in the Scott catalogs.

The low print quantities and availability via mail order only make them ineligible for Scott catalog numbers.

Herewith are a few statistics for the cache of 28 covers I have amassed thus far.

The earliest example, illustrated in Figure 1, is a cover addressed to me that is franked with a 2012 War of 1812 Bicentennial stamp picturing the USS Constitution, postmarked Aug. 22, 2012, in Fort Wayne, Ind.

As such, the Figure 1 cover represents an early use of the imperforate stamp from the press sheet.

Seventeen different issues are represented among the 28 covers I have found. Each cover bears a single imperforate stamp of the given issue.

Of these, the 2012 War of 1812 Bicentennial stamp featuring the USS Constitution is represented the most, with four such covers.

In second place, with three covers, is the imperforate 2013 Emancipation Proclamation stamp.

Twelve of the covers are franked with an imperforate stamp with selvage on one or more sides, which provides added proof that the stamp came from a press sheet without die cuts.

The 2013 La Florida stamp on the cover illustrated in Figure 3 shows marginal selvage at right and bottom.

As an added bonus, the plate number V111111111 appears in the bottom selvage.

One question to ponder for the future: How might the Scott catalog editors deal with the discovery of a legitimate die-cutting-omitted error for a die-cut stamp that also was printed in uncut press sheets without die cuts?

Well, to paraphrase an old saying, we’ll cross that philatelic bridge if (and when) we get to it.