Methods of U.S. shortpaid mail handling from 1958 to the present 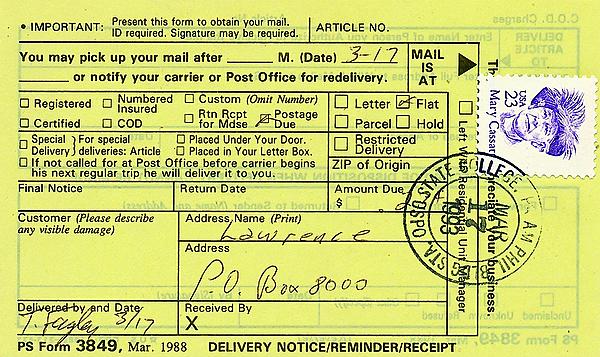 Figure 4. Form 3849 was placed in the post office box of the addressee. The 23¢ stamp was apparently used to indicate the amount of postage due on a shortpaid flat. The addressee paid the 23¢ due and was given the shortpaid flat. 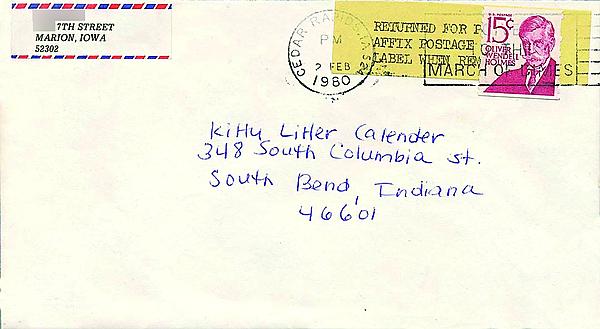 Figure 3. This February 1980 letter weighing up to one ounce was originally mailed unpaid, and returned for postage. As requested by the label, the 15¢ stamp was placed over the label by the sender, and the letter was forwarded to the addressee. 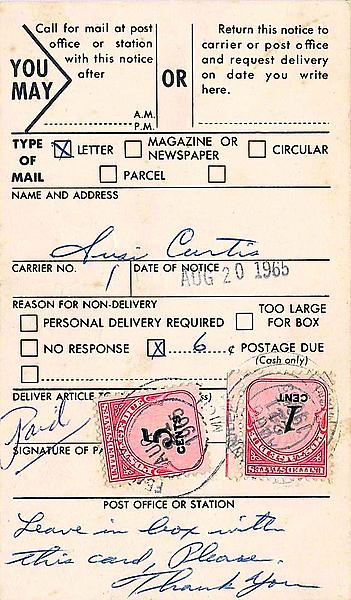 Figure 2. Form 3750 dated Aug. 20, 1965, was placed in the post office box of a patron indicating with 6¢ in canceled postage due stamps the amount due on a shortpaid letter. The addressee received the shortpaid letter by paying the 6¢ due. 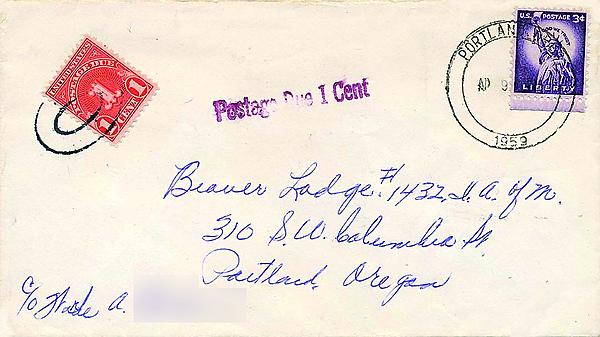 Just like the four examples illustrated in the previous column, these four examples demonstrate the various ways in which shortpaid surface domestic first-class matter was handled from 1958 to the present day.

I developed this in two segments because the held-for-postage process, which I ignored in the first part, no longer existed after June 30, 1958.

Because of this, beginning with the Post Office Services Transmittal Letter 46 of the Postal Manual of Oct. 8, 1958, there was a significant change in how shortpaid first-class surface domestic mail was handled.

Here is the Post Office Department’s description of the new process: “Insufficient first-class mail at the mailing and delivery offices without postage or with insufficient postage dispatched to addressee postage due. If refused by addressee, Return to Sender for postage due payment.”

That means that shortpaid items were no longer initially returned for postage or held for postage.

The Postal Procedures Transmittal Letter 59 of July 27, 1958, indicated how shortpaid matter at the delivery office was handled: “Postage due stamps to be used only for collection of postage due on mail. Affix these stamps on postage due mail received for delivery and immediately cancel them (if no postage due stamps available, ordinary stamps may be used). If due postage not collected and mail returned or sent to dead letter office, the stamps are to be marked ‘Voided.’”

The comment that ordinary stamps could be used is not found in post-1979 documents of the United States Postal Service, but as we’ll see later with a use of Form 3849, this use was allowed after 1979.

The 1959 first-class domestic surface letter in Figure 1 was mailed in 1959 franked with the 3¢ Liberty stamp of the 1954 Liberty series, so it shortpaid by 1¢ the 4¢ letter rate of the time.

After Oct. 10, 1958, various delivery forms were also used, where the canceled postage due and ordinary stamps were placed on the form itself to indicate postage was due on a shortpaid item and that it was collected.

The form was placed in the post office box of a patron indicating with the canceled 6¢ in postage due stamps (1¢ Scott J89 and 5¢ J93) that 6¢ was due on a shortpaid letter.

As indicated by the manuscript “Paid” on the form (to the left of the 5¢ stamp), the addressee got the shortpaid letter by leaving 6¢ due in cash in the post office box, a fact also indicated because the stamps were not voided.

Before we look at a 1993 use of Form 3849, note that the Postal Service Manual of Nov. 17, 1974, further stated the following: “First-class mail without postage at the mailing and delivery offices, is to be returned to the sender for postage. First-class mail at the mailing and delivery offices with insufficient postage dispatched to addressee postage due. If refused by addressee, Return to Sender for postage due payment.”

These statements remained true through the latest Domestic Mail Manual of Jan. 26, 2014.

That is, for the first time since Oct. 10, 1958, unpaid mail at the mailing office was returned for postage. The February 1980 up-to-one-ounce unpaid domestic first-class letter in Figure 3 demonstrates this.

The letter was returned for postage with a label that reads: “RETURNED FOR POSTAGE AFFIX POSTAGE OVER LABEL WHEN REMAILING.”

The 15¢ Oliver Wendell Holmes Great American series coil stamp (Scott 1305E) was placed over the label by the sender, and the letter was forwarded to the addressee.

In this case, the 23¢ Mary Cassatt Great American definitive stamp (Scott 2181) was apparently used to indicate the amount of postage due on a shortpaid flat: the ordinary postage was allowed for this use despite no Domestic Mail Manual statement allowing it.

The addressee then came to the postal clerk with the form, paid the 23¢ due, and was given the shortpaid flat.

We have now seen the two techniques used from 1958 to 2014 to collect postage due on shortpaid U.S. domestic surface first-class mail. One technique involved returning items to the sender for postage due on unpaid mail. The other three examples demonstrated three ways in which the postage due stamps or ordinary postage stamps were used to show the shortpaid amount that was collected in the delivery office on an insufficiently paid item.