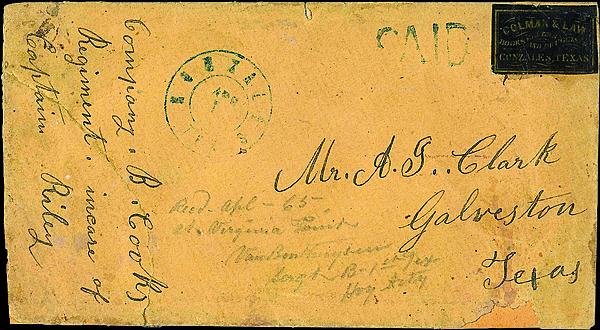 The rare 1865 Gonzales, Texas, Confederate postmaster’s provisional stamp on a cover to Galveston, Texas, far exceeded its presale estimate in the June 24 auction by Robert A. Siegel.

One of the two recorded covers franked with the 10¢ gold on black Confederate postmaster’s provisional stamp from Gonzales, Texas, (Scott 30X3) was sold June 24 by Robert A. Siegel Auction Galleries for $54,625.

The price realized includes the 15 percent buyer’s commission added to the hammer price.

The cover was among the items offered in part 1 of the Brandon collection of Confederate States’ postmasters provisionals.

The final price far exceeded the original Siegel presale estimate of $20,000 to $30,000. The stamp on cover is listed with a dash in the value column in the 2014 Scott Specialized Catalogue of United States Stamps and Covers, indicating that there isn’t enough information available to establish a usable value.

The April 1865 cover is addressed to Galveston, Texas. The stamp is pen canceled with two strokes (including one that ties it to the cover), and the envelope is struck with a Gonzales double-circle datestamp and “PAID” straightline postmark.

Siegel explains that John B. Law, the Gonzales postmaster at the time, was in a bookselling partnership and used the small book labels associated with his firm as provisional stamps during the Civil War.

The envelope was sold with its original enclosure, datelined “Gonzales Texas, March 28, 1865.”

It was one of more than 150 covers and stamps sold from the collection of Confederate specialist Ralph F. Brandon. This fall Siegel expects to offer more than 600 lots in part 2 of the collection, including general issue essays, off-cover multiples and covers.