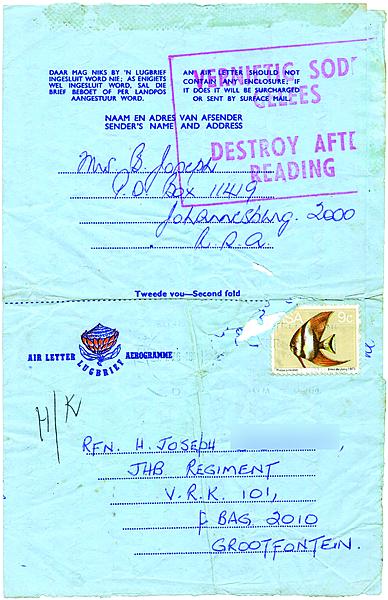 This 1976 air letter is an unusual document from the early days of the Angola conflict.

This January 1976 South African aerogram is a mess — torn and soiled, with a chunk missing from the 9¢ Angelfish stamp of 1974 (Scott 415) — but the large boxed bilingual Afrikaans and English handstamped marking in red ink, “Destroy After Reading,” helps explain why.

This is a letter to Rifleman H. Joseph of the Johannesburg Infantry Regiment, South African Army, from his mother. His unit was on active duty inside Angola, which had achieved independence from Portugal on Nov. 11, 1975.

As Mrs. Joseph wrote, “There was a t.v. programme last night dealing with the Angolan conflict … Altho it was interesting, they didn’t show anything of the S.A. involvement, & we are still kept in the dark.”

South Africa withdrew its forces from Angola after MPLA and UNITA leaders signed a U.S.-mediated peace accord in 1988, but the civil war continued until both sides signed a peace treaty at Lisbon in 1991. This air letter is an unusual document from the early days of the conflict.