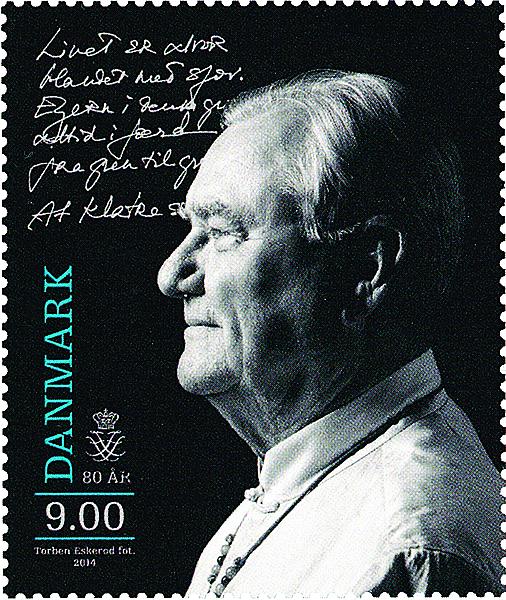 Denmark, Faroe Islands and Greenland each issued a stamp with the same design to celebrate the 80th birthday of Prince Henrik, born June 11, 1934. The Danish stamp (shown here) is denominated 9 kroner, the Faroese stamp is 14.50kr, and the Greenlandic

Denmark, Faroe Islands and Greenland participated in a three-way joint issue to celebrate the 80th birthday of Prince Henrik, the prince consort of Denmark.

The stamps were issued on his birthday, June 11.

In 1964, while serving as an embassy secretary in London, he met Princess Margrethe of Denmark, now Queen Margrethe II. The couple married June 10, 1967. Their sons Crown Prince Frederik and Prince Joachim were born in 1968 and 1969, respectively.

The official website of Denmark, www.denmark.dk, said of the prince consort: “Like the Queen, Prince Henrik is an intellectual. He holds a university degree in French literature and Oriental languages and has published several books, including a volume of memoirs, Destiny Binds, in 1996, the poetry collection Cantabile, illustrated with collages created by the Queen, in 2000 and the poetry collection Whispering Breeze, also published in French as Murmures de vent, in 2005.

“He is moreover an established cookery book writer and an experienced winegrower.”

The prince consort also is an artist and sculptor.

The three stamps, 9 kroner from Denmark, 14.50kr from the Faroe Islands and 17.50kr from Greenland, reproduce the same portrait of the prince consort on a black background with handwritten text from his poem Egernet (the squirrel) at upper left.This poem is from his Whispering Breeze collection.

The portrait of Prince Henrik is from a photograph taken by Torben Eskerod in 2013.

In an article in Post Danmark’s publication for collectors, Journal, Eskerod said: “The portrait was intended to fill a whole wall, so it is slightly interesting that Post Danmark has subsequently decided to use the portrait of the Prince Consort on such a small format as a stamp.

“The portrait was taken in the Throne Room at Amalienborg, and the Prince Consort chose the relaxed attire for the photograph himself as it depicts him as the artist he is.”

Jakob Monefeldt and Post Danmark designed the stamps. They were printed by offset at Post Nord’s printing facility in Stockholm, Sweden. Post Nord is the combined Danish and Swedish communication and logistics group.

Greenland issued its 17.50kr stamp in sheets of 20 and in a souvenir sheet of one.