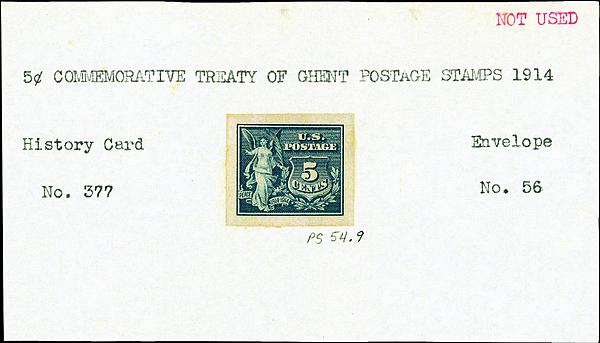 Figure 4. The 5¢ Peace stamp, shown here as an essay on a BEP “history card,” was to be in the same dark blue color as the current 5¢ George Washington stamp. 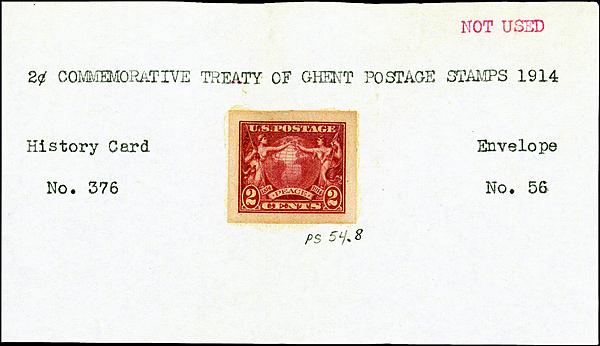 Figure 3. From the BEP files, the “history card” bears an essay of the red 2¢ domestic-rate Peace stamp as it would have been issued. 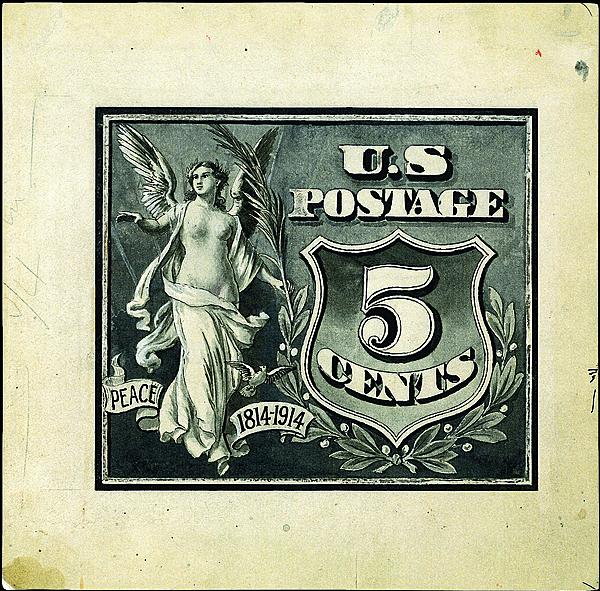 Figure 2. C. Aubrey Huston also designed the 5¢ stamp honoring the Treaty of Ghent. Originally a 2¢ value, it was revised to 5¢ at the request of the postmaster general. 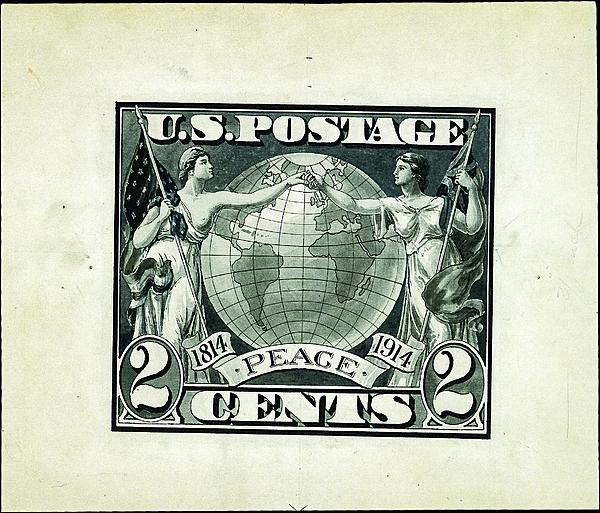 Figure 1. The model of the approved 2¢ Treaty of Ghent stamp was by BEP artist C. Aubrey Huston.

War is destructive on a scale from immense to minute, and among the lesser casualties of World War I were a pair of United States postage stamps intended for release in 1914.

Mindful of the forthcoming centennial of the Treaty of Ghent — the peace treaty signed Dec. 24, 1814, in Ghent, Belgium, that ended the War of 1812 between the United States and Great Britain — organizers on both sides of the Atlantic made celebratory plans.

In England, an Anglo-American Exposition was planned for May-October 1914 at Shepherd’s Bush, London, to celebrate 100 years of peace and progress in the arts, sciences and industries in the two nations. The Earl of Kintore was the exhibition chairman, and a committee of U.S. dignitaries was formed to encourage American participation in the event.

Accompanied by Imre Kiralfy, director general of the exposition, the Earl of Kintore arrived in New York City on Jan. 10, 1914, to meet with the expo’s U.S. committee as well as the American Committee to Celebrate the Signing of the Treaty of Ghent. The chairman of the latter group accompanied Kintore and Kiralfy to Washington, D.C., a few days later to present them to President Woodrow Wilson and Secretary of State William Jennings Bryan.

On Jan. 15, The New York Times reported that, “Another committee of the celebration organization, made up of Calvin W. Rice and Dr. George F. Kunz, has gone to Washington to consult with the Postmaster General and the secretary of the Treasury with a view of having special postage stamps, and, if possible, special coins issued by the Government to stimulate interest in the celebration of the signing of the treaty.”

The lobbying was successful, as shown by a letter in the historical files of the Bureau of Engraving and Printing, dated Jan. 27, 1914, from Alexander M. Dockery, third assistant postmaster general, to the director of the BEP. Dockery asked the BEP to prepare and submit designs for two new postage stamps of 2¢ and 5¢ denominations to commemorate the centenary of the Treaty of Ghent.

“The designs should symbolize Peace, and should bear the words ‘U.S. Postage. 2 (or 5) cents. Peace 1814-1914,’” Dockery wrote. “The size should be the same as of the current ordinary stamps, but the long dimension should be horizontal instead of vertical.” (The domestic letter rate was 2¢, and the international letter rate was 5¢.)

On June 12, Dockery wrote to the Secretary of the Treasury (William Gibbs McAdoo, though not addressed by name in the letter) requesting that the BEP be authorized to prepare models for two stamps “to commemorate the one-hundredth anniversary of peace among English speaking peoples which is to be celebrated this year.”

Dockery listed four suggested designs, and enclosed drawings or sketches (not with the letter in the BEP files). He labeled the suggestions A, B, D and E.

“A” was a pencil sketch of “a female figure typifying Peace, a flying dove of peace in the lower part of the picture, olive branches in the right and left borders, the words ‘U.S. Postage’ above the picture, and Peace 1814-1914 and ‘2 cents 2’ below it.”

Design suggestion “B” was for a 5¢ stamp with a portrait of President James Madison, who was in office during the War of 1812, with olive branches in the right and left borders and the wording “James Madison 1814 Peace 1914.”

Design “D” depicted a hemisphere with a female figure at left representing America with its flag in the background, and at right, a female “Britannia” in front of a British flag, “the two figures clasping hands across the hemisphere.” This design was for a 2¢ stamp.

The “picture” might have been the most common image of the Ghent signing: a 1914 painting by the French artist Amedee Forestier titled A Hundred Years Peace. It was used on a 6-franc+3fr Belgium semipostal in 1964 (Scott B753) to mark the sesquicentennial of the treaty.

Dockery concluded the June 12 letter by asking the BEP director to submit the completed designs to the PMG, along with “any additional designs which in his judgment would be appropriate.”

This letter was datestamped June 17 on the reverse and docketed, “Treasury Department, Office of the Secretary, June 16, 1914. Respectfully referred to the director of the bureau of engraving and printing who is hereby authorized and directed to prepare models for two postage stamps of special design, 2 cent and 5 cent, as within requested.”

On June 30, J.E. Ralph, director of the BEP, wrote to the third assistant PMG in order to “submit herewith two models of each of these two denominations in accordance with the suggestions made by your office.”

While the POD and the BEP were busily working on appropriate stamps to celebrate Anglo-American peace, newspapers were reporting the assassination of the Austrian Archduke Francis Ferdinand and his wife on June 28 in Sarajevo, as the pair were making their annual ceremonial visit to the annexed province of Bosnia and Herzegovina.

This regrettable event, though seemingly inconsequential (except to the royal succession of Austria) was, of course, the first pebble in the avalanche that became World War I. The murders swiftly led Austria-Hungary to declare war on Serbia, followed rapidly in the summer of 1914 by further invasions and declarations of war.

It is unfortunate that in this pre-photocopying era, copies of the designs under consideration referred to as attachments to the POD-BEP correspondence do not exist, because it is confusing now to try to match the designs referenced by initials in the June 12 POD letter with the designs that were eventually chosen.

It is possible that the missing design “C” was put into consideration at some point, because the 2¢ stamp that finally was approved was not one of the designs (either as 2¢ or 5¢) described in the June 12 letter.

On July 9, the third assistant PMG returned to the BEP the design for a 2¢ stamp that had been approved that day by the postmaster general, but unfortunately he did not describe its design. The July 9 letter also asked the BEP to revise “the other design for 2¢ Peace stamp” to be redrawn as 5¢.

To reiterate, the 2¢ designs, “A” and “D,” were of a female figure with doves and olive branches, and a hemisphere with two figures and flags, respectively.

BEP Director Ralph replied on July 24 that he would submit the usual proofs when the engraving of the 2¢ stamp was completed, and enclosed the model of the revision of the 2¢ design into a 5¢ value.

On July 27, Dockery returned the 5¢ model to Ralph, stating that the acting PMG [Daniel C. Roper] had approved it that day, adding that the “model is a striking design and very beautiful,” and that the die proofs should be “printed in the blue ink used for the ordinary 5¢ stamp,” presumably a reference to the 5¢ Washington definitive (Scott 396).

The approved 2¢ design shown in Figure 1 was modeled by the BEP’s Clair Aubrey Huston. The engravers of the die were Harry L. Chorlton, vignette; and Frank Lamasure and Edward M. Hall, lettering.

The approved 5¢ design in Figure 2 also was modeled by Huston; the vignette was engraved by Charles Chalmers, and the lettering by Hall.

The 5¢ design was similar to the PMG’s initial request in the June 12 letter for a 2¢ stamp featuring a female figure with doves and olive branches, but it lacked the doves, and had the addition of a very prominent shield holding the denomination (altered to 5¢ as ordered by the third assistant PMG’s letter of July 9).

Accounting records of the BEP indicate that their artists worked on the steel engravings for a total of 10 days between July 23 and Aug. 25, for a total labor cost of about $424 (about $9,740 in today’s dollars).

BEP “history cards” with essays of the two stamps are shown in Figures 3 and 4.

Meanwhile, war was consuming a large part of Europe. Russia mobilized, and Germany invaded Luxembourg and Belgium, moving toward France.

The POD announced the new stamps, and the news was greeted with incredulity.

The Harrisburg (Pa.) Star-Independent of Aug. 3 editorialized, “The Postoffice Department started preparations, according to a dispatch from Washington, to issue two special postage stamps to mark the centenary this year of peace between Great Britain and the United States. The designs have been approved by Postmaster General Burleson.

“That he passed on them before the outbreak of the European war is evident from the description of the designs. … In the light of present developments in Europe it is doubtful whether these peace stamps will be issued to the public, even though supplies of them have been printed. If they do reach the public they will be sadly out of harmony with existing conditions in this troubled world.”

Supplies actually had not yet been printed, and on Sept. 17, Third Assistant PMG Dockery telephoned BEP Director Ralph, confirming afterward by letter, to request the return of the designs to his office “for review.”

Ralph sent the designs that day, adding that, “The dies for these stamps have been completed, and the same will be placed in the vaults of this Bureau and held subject to your orders.”

The files do not indicate the date when PMG Burleson withdrew his approval, but each of the two approved proof cards was amended with a typewritten note, “Order of approval rescinded and no further action is to be taken without first bringing same to personal attention of Postmaster General,” with Burleson’s inked signature.

In Scott’s Monthly Journal of July 1922, Kent B. Stiles wrote that in September 1914, “Peace organizations requested the Post Office department not to issue the two Peace adhesives.”

That might be true, but it also is likely that simple common sense drove the decision. Events were not cooperating with celebratory spirits. For instance, the festivities planned in Ghent that fall, to commemorate the peace treaty centennial, were canceled because German troops were occupying the city.

An article in the United States Specialist of October 1993 described an exhibit by the BEP titled “Stamps That Never Were: A Bureau Exhibit,” which had been displayed at the Bureau Issues Association annual meeting that year in St. Louis.

The article said that, “Some die proofs were removed in 1929 by Postmaster General Harry New.”

In his July 1922 Scott’s Monthly Journal article, Stiles noted that “no decision has been reached officially by the Post Office Department to destroy the two master dies. In other words, philatelists will be interested to know that the two Peace stamps may yet be issued.”

The Treaty of Ghent was not official until the U.S. Senate ratified it on Feb. 16, 1815. At least in theory, the U.S. Postal Service could dust off those dies, alter the 2¢ and 5¢ values to say “Forever,” and give the War of 1812 bicentennial a real philatelic send-off.