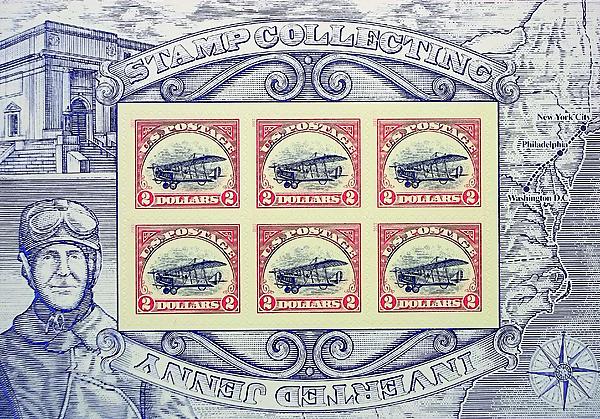 A stamp collector in Texas reported the most recent find of an upright $2 Jenny Invert pane.

More of the intentionally created upright variety of the $2 Jenny Invert panes have surfaced, and one of the previously reported panes has been sold.

Eight of the 15 panes found have been reported to the United States Postal Service, with the remainder reported by different grading firms that have examined examples outside of the USPS tally.

Collector Michael Generali contacted Linn’s March 13 to report his find. He said the sheet he obtained was the last one available from the McNeil post office in Austin, Texas.

He first bought two panes, went to his car, opened the sealed packages and found he had the standard variety showing the plane flying upside down.

He went back into the post office and asked how many panes were left. The clerk counted out 20 panes, and Generali bought them all.

He then went home and began opening the packets.

“It was not until I opened the last packet that I pulled out the upright Jenny,” he said. “A wonderful surprise!”

Generali told Linn’s he has been collecting stamps since 1962.

“This is the most exciting find I have ever had buying stamps,” he said.

He contacted Postal Service headquarters using the phone number provided on the cardboard insert and was told his find was the eighth reported to the USPS.

The pane-position diagram on Generali’s find identifies it as coming from position 4, in a sheet layout that is three panes across by two down.

USPS stamp services executive director Susan McGowan told Linn’s on March 13 that three additional panes had been reported recently, not including the eighth discovered by Generali. The fifth and sixth finds were at separate post offices in New Hampshire, and the seventh find was obtained by mail with an order placed through the Postal Service’s USA Philatelic catalog.

A second upright Jenny Invert pane has sold, but the amount paid for it was not disclosed.

Sam Malamud of Ideal Stamp and Coin in New York City contacted Linn’s to share that his company has purchased a second pane.

Ideal Stamp and Coin also purchased the first pane that was sold by a finder, paying $25,000, the amount the firm has been offering for the variety in advertisements.

The odds of finding one of the 100 panes printed with the intentional variety is estimated by Linn’s to be 1 in 19,000.