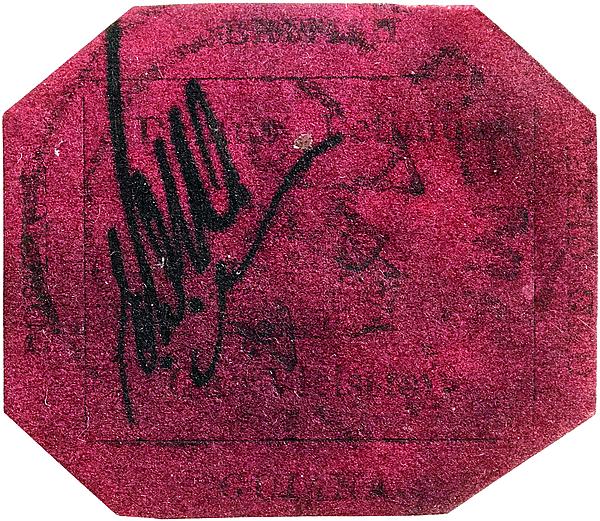 The unique 1856 1¢ Magenta of British Guiana will be auctioned by Sotheby’s June 17. Photo courtesy of Sotheby’s.

The much anticipated June 17 auction of the famed British Guiana 1856 1¢ Magenta is already generating interest among potential bidders.

London-based Sotheby’s will sell the stamp in a single-lot sale from its York Avenue galleries in New York City.

Longtime auction agent Victor Krievins of Pennsylvania told Linn’s that he already has several clients “from around the world” who are interested in bidding on what is widely acknowledged as the world’s most valuable stamp.

Krievins acted as the auction agent for John E. du Pont when du Pont acquired the stamp in 1980 for a then-record sum of $935,000.

Shown here is a recent photograph of the stamp that Sotheby’s provided to Linn’s. Although some of the design elements have faded over the years, and the magenta paper has lost some of its luster, the stamp apparently has lost little of its iconic appeal.

Sotheby’s has set a presale estimate of $10 million to $20 million. To generate enthusiasm and to introduce the stamp to a new generation of well-heeled stamp collectors and others with a passion for the rare and desirable, Sotheby’s is taking the stamp on a worldwide tour. Stops are planned in various locations, including London and Hong Kong.