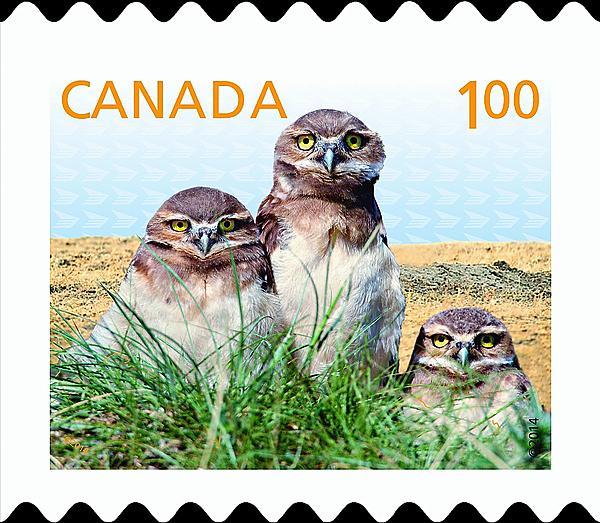 In addition to the five self-adhesive stamps in different formats, the set will include a perforated souvenir sheet of five with moisture-activated adhesive and four nondenominated ($2.50) international-rate postal cards.

The nondenominated (85¢) Beavers permanent stamp pays the new domestic letter rate and will be issued in coils of 100 and 5,000. The permanent stamp is always valid as postage for the first-class letter rate, regardless of future rate increases.

All of the booklet and coil stamps are self-adhesive and have serpentine die cuts.

Customers who only want to purchase a single domestic letter-rate stamp at a post office counter will pay Canada’s new single-stamp rate of $1. A $1 Burrowing Owls stamp created for that rate will be issued in a coil of 50.

The souvenir sheet includes one stamp of each denomination, with five pictures of different wilderness scenes in the selvage.

Canada began the Baby Wildlife series Jan. 17, 2011, with a set of four stamps featuring arctic hares, a red fox, Canada goslings and a polar bear cub. A set issued Jan. 16, 2012, pictures raccoons, caribou, loons and a moose. The Jan. 14, 2013, set shows woodchucks, a fawn, a black bear and a porcupine.

The new stamps were designed by Monique Dufour and Sophie Lafortune.

Lowe-Martin printed the stamps by five-color offset lithography and the souvenir sheet by nine-color lithography on Tullis Russell paper, with general tagging on all four sides.

The self-adhesive stamps have serpentine die cuts. The souvenir sheet is perforated and has PVA gum.

As definitives, the stamps will be in continuous printing as needed. The souvenir sheet print run is 155,000.

Canada Post will service 11,500 official first-day covers franked with the souvenir sheet. The FDC will have a Dawson City, Yukon Territory, postmark and is Canada Post item 401384144.