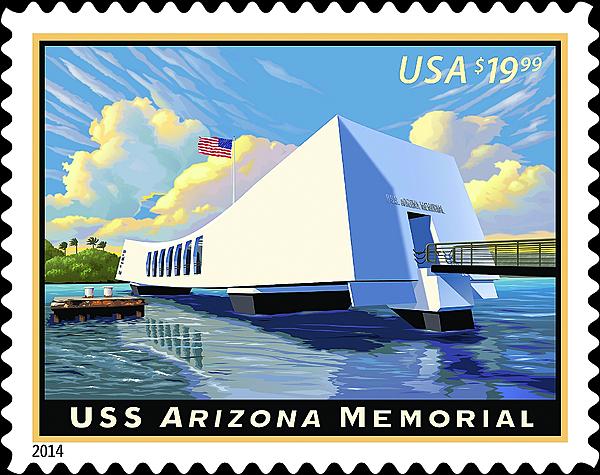 A collector will have to shell out almost $600 to buy an uncut press sheet of the $19.99 USS Arizona Memorial stamp.

How much would you be willing to pay for an uncut press sheet?

Get ready for some serious sticker shock.

The United States Postal Service’s uncut press sheets for the $19.99 USS Arizona Memorial stamp, both with and without die cuts, comprise three panes of 10 stamps and sell for $599.70.

That, my fellow collectors, is nothing more than a bald-faced act of greed on the part of the USPS.

I’d say the sheets are vastly more popular among USPS officials, who must be salivating at the prospect of extracting almost $600 per sheet from dealers and collectors.

Both varieties of the USS Arizona Memorial press sheet were printed in a quantity of 500. Given the exorbitant price tag, I would be amazed if either one becomes a sellout.

Perhaps the Postal Service isn’t paying much attention to the sales figures for press sheets based on their total face-value cost.

By my reckoning, the more affordable sheets with broadly popular themes have sold well.

For example, both the Modern Art in America and the Made in America sheets without die cuts, which sold for $22.08 and $27.60, respectively, sold out relatively quickly.

No surprise there: A roughly $25 outlay from one’s stamp budget is much easier to accommodate than an expenditure 24 times that amount.

Linn’s has editorialized numerous times against expensive, gimmicky stamp products. But our pleas, evidently, continue to fall on deaf ears.

The most recent big-ticket item prior to the USS Arizona Memorial press sheets was the Jenny Invert collector’s set, which retailed for $200. Postal Service marketing went into overdrive for this product, with splashy online advertising well in advance of the item being placed on sale.

And the USPS dangled the limited-edition carrot, saying that no more than 5,000 would be produced.

Well, as you might imagine, many collectors balked at having to pony up $200. Result: just 1,900 were sold.

I am pleased to announce that a new column focusing on United States essays and proofs debuts in this issue on page 26.

Penned by noted essay and proof expert and dealer James E. “Jim” Lee, the column will appear bimonthy in the week 4 issue of Linn’s.

In his inaugural column, Lee introduces us to essays and proofs, and the roles they play in the progression from an idea for a stamp to a finished, printed design.

Although relegated to the back of the Scott Specialized Catalogue of United States Stamps and Covers, essays and proofs offer myriad collecting possibilities and come in a veritable rainbow of colors.

Moreover, they are an essential part of the story of any stamp, should one wish to exhibit at a competitive level.