Flag pane with 2014 date issued March 17; not at post offices 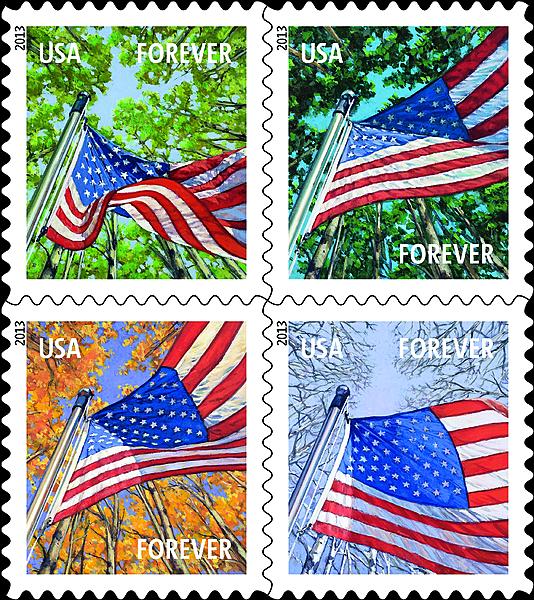 A USPS publicity image for the 2013 version of the four United States A Flag for All Seasons stamps. A new variety with a 2014 date was issued March 17.

The United States Postal Service issued four nondenominated (49¢) A Flag for All Seasons forever stamps March 17 in a pane of 20 (convertible booklet).

A first-day cancel for the new issue was made available in Liberty, Mo.

The stamps carry a 2014 year date, differentiating them from a similar variety with a 2013 year date issued last May, as reported in a story in Linn’s March 31 issue.

The new booklet is printed by Banknote Corporation of America for Sennett Security Products.

“Collectors can order it through SFS [Stamp Fulfillment Services] only,” said Susan McGowan, USPS executive director of stamp services. The USPS item number for the pane of 20 is 688445.

“It won’t be available in post offices, as it’s primarily available for our Stamps on Consignment program,” McGowan added.

The Stamps on Consignment program provides stamps that are sold in grocery stores and similar retail outlets.

New signs featuring the A Flag for All Seasons stamps were created last year for these outlets. That signage was distributed before the new 2014 Star-Spangled Banner stamp was issued.

Instead of creating new signs, the Postal Service ordered additional A Flag for All Seasons stamps.

The Postal Service contracted for 2.2 billion stamps of the new variety. According to McGowan, the new issue will be sold at Stamps on Consignment retail sites for approximately one year.

The stamp designs, shown here in a USPS publicity image for the 2013 issues, are by illustrator Laura Stutzman. Each stamp depicts an American flag flying from a flagpole and viewed from below, with trees in the background representing one of the seasons of spring, summer, fall or winter.

Varieties of the A Flag for All Seasons stamps have been released over the course of five issue dates. In 2013, the formats issued included a booklet pane of 10, as well as coils of 100 and booklets of 20 manufactured by each of the Postal Service’s three contract printers.

Nondenominated (49¢) A Flag for All Seasons stamps

Standard ordering instructions apply. Collectors requesting first-day cancels are encouraged to purchase their own stamps and affix them to envelopes. The first-day cover envelopes should be addressed for return (a removable label may be used), and mailed in a larger envelope addressed to A Flag for All Seasons Stamps, Cancellation Unit, Box 449992, Kansas City, MO 64144-9992. Requests for first-day cancels must be postmarked by May 16.

The Postal Service’s uncacheted set of four first-day covers for the A Flag for All Seasons stamps is item No. 688418 at $3.72. USPS order numbers for stamps and FDCs also appear in Linn’s 2014 U.S. Stamp Program.