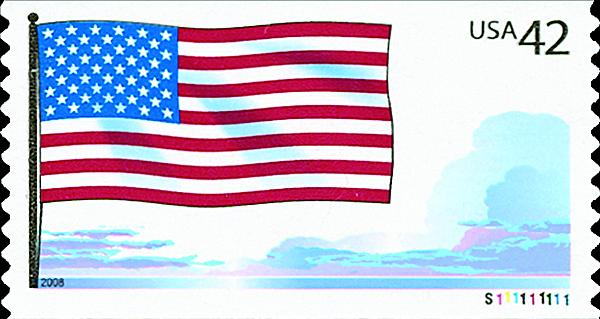 The 42¢ American Flag stamp was the first of 60 Flags of Our Nation stamps issued June 2008 through August 2012. The coil stamps are going off sale March 31.

The coil stamps, issued as six sets of 10 in separate coils of 50, picture flags and scenery from the U.S. states and territories, along with four American Flag stamps.

Post office sales of individual stamps or partial coil rolls were not permitted.

The USA Philatelic catalog for Quarter 1 of 2014 listed all six coils in the “Last Chance” section, with a notice that the stamps will be removed from sale March 31.

The ambitious Flags of Our Nation series had its high and low points through its five-year run, in what was originally planned as a three-year program.

Enthusiasm for the series came early on, with the Postal Service drawing comparisons with the success of the U.S. Mint’s commemorative state quarters program.

The stamps also saw greater usage on mail than standard commemoratives issued during the same period.

The stamps in the first two sets, issued in June and September 2008, were denominated 42¢ to meet the then-current first-class letter rate.

In 2007, the Postal Service had introduced the Liberty Bell forever stamp, available only in pane formats. Consumer interest in the new forever stamps might have impacted sales of the denominated 42¢ Flags of Our Nation stamps at the time.

A total of 500 million stamps (10 million coils) were produced for each of the first two Flags of Our Nation sets.

In August 2009, the third set was issued with the stamps denominated at the 44¢ postage rate. The Postal Service initially planned for two coil sets to be issued each year, but that changed in 2009 to correspond with demand, which was apparently slowing.

Another 500 million stamps were produced for the third set.

Sales of the fourth set of Flags of Our Nation stamps slowed dramatically in comparison to the previous set. The U.S. Inspector General, in a June 2012 report on stamp manufacturing and inventory management, revealed a startling drop in sales.

The same report said that 496.57 million of the 500 million stamps from the third set sold.

“Asset Management Planning is providing Stamp Services with historical data on stamp attributes and sales with recommendations based on collected sales data.

“As much a factor that this information can be, one would have been hard pressed to predict a fall-off in sales of Flags of Our Nation by seventy-five percent between Series 3 and Series 4.

“Nonetheless, that market lesson was quickly learned and production was cut in half for the final two series.”

In December 2010, the Postal Service issued its first forever stamp in a coil format, which also impacted sales of the fourth set of 44¢ Flags of Our Nation stamps.

A total of 250 million stamps (5 million coils) were produced of each of the final two sets.

Another overarching problem that plagued the series was erratic post office distribution.

Most of the six sets were not automatically shipped to post offices, leaving it up to individual postmasters to place orders for the stamps.

For collectors, after overcoming the challenges of acquiring the stamps, additional difficulty was created by the unusual format. Each individual stamp is twice the size of a standard definitive coil stamp. A strip of 10 Flags of Our Nation stamps, therefore, is too large to display on standard album pages, so the Scott catalog editors chose to list the stamps as strips of five.

In the Scott catalog listings, each strip of five is designated with a minor letter “a” following each fifth design in the set.

The catalog also lists with a minor letter “b” a plate number strip of 10 consisting of the two five-stamp strips that make up one of the sets.

The Scott catalog notes, however, that these longer strips “will not fit in any standard album.”

The table on this page lists the six different Flags of Our Nation sets, along with the current USPS item numbers for ordering the stamps.