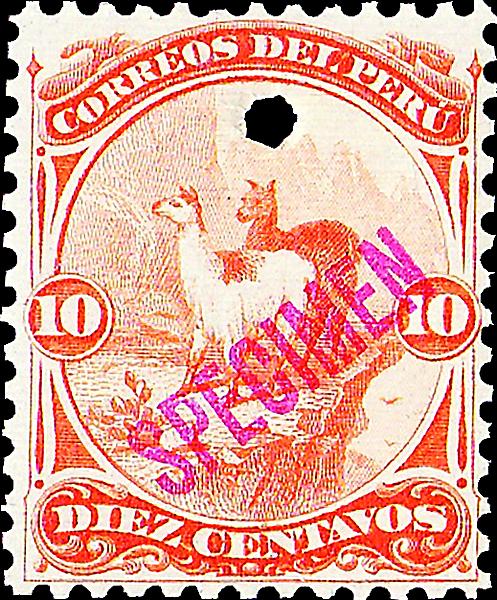 Figure 2. This specimen example of the 10-centimo stamp from Peru’s 1895 Llama set has a hole drilled through it.

I like the subject matter, and I like the fact that the set is hidden in the Scott Standard Postage Stamp Catalogue, buried among the issues of the 1886 Arms set (Scott 104-115).

The original Llama stamp set (Scott 16-18) was intaglio printed by American Bank Note Co. and issued in 1866-67. These three stamps are a 5-centimo green, a 10c vermilion and a 20c brown.

The same plates were used in 1895, with the imprint of American Bank Note Co. appearing three times on each side and three times again at top and bottom. The 1895 stamps are a 5-centavo claret, a 10c orange and a 20c deep ultramarine.

Specimen stamps from this set were overprinted diagonally in red block letters; an example is pictured in Figure 2.

The 10c specimen shown is drilled; the other two specimen values from this set are not.

When the 1895 series was issued, Peru was still emerging, somewhat battered, from the War of the Pacific (1879-83), during which the country suffered the humiliation of Chile’s occupation of some of Peru’s port cities.

Until 1895, stamps were issued using old designs printed in new colors. Their use was short-lived.

Some of the 10c values were remaindered in 1896, being canceled with the word “franca” or with a Lima circular date stamp containing two pairs of tildas (~) in the cancellation.

The 5c and 20c values appeared in March 1895; the printing numbers for these values are unknown. They were also overprinted in red with a boxed “GOBIERNO” for official use (Scott O21-O22).

If the relative scarcity of the regular issues can be gleaned from the catalog value, Scott suggests that the 5c claret should be somewhat more difficult to find than the 10c orange, and that the 20c deep ultramarine is much more difficult.

This agrees with my experience. The 10c orange is readily found at most stamp bourses.

The 5c and 20c denominations are more difficult to locate.

There is not a great variety of cancellations. Most stamps were canceled with a circular datestamp. If registered, the stamp might bear part of a “certificado” mark, a rosette, or three parallel bars, the ends of which outline a circle. Occasionally, one finds a straight-line cancellation from the prestamp period, or the name of a town in a matrix of dots in a style that was widely used in the 1860s and 1870s.

Collectors interested in Peruvian stamps should check out the Peru Study Circle at http://groups.yahoo.com/group/Peru_Philatelic_Study_Circle.