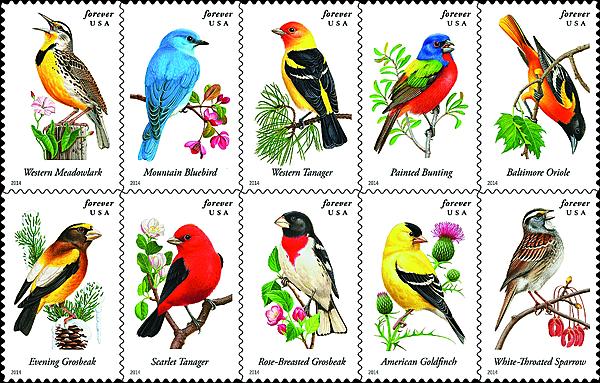 Ten colorful songbirds will take to the air on commemorative forever stamps issued April 5 in Dallas, Texas, and nationwide the same day.

The new stamps will be sold in a format popular with mailing customers: a double-sided pane of 20 known as a convertible booklet. The initial print run by United States Postal Service contract printer Ashton Potter will be 400 million stamps.

The offset-printed stamps reproduce paintings by artist Robert Giusti. Each bird is painted perched upon a tree branch or among flowering blossoms. The name of the bird appears in italic type at the bottom of each stamp.

Derry Noyes served as the USPS art director for the project.

The set also will be offered in press sheets, both with and without the die cuts that normally separate individual stamps. Each press sheet consists of eight panes and sells for $78.40, with 2,500 press sheets of each type available.

“Between 4,000 and 4,500 different types of songbirds can be found around the planet, accounting for nearly half of all bird species,” the Postal Service noted in its initial announcement of the stamp set. “Songbirds are identified by their highly developed vocal organs, although some, like the crow, have harsh voices, and others sing rarely, or not at all.”

The Baltimore oriole appeared previously on the 1982 State Bird stamp for Maryland (Scott 1972).

Technical details and first-day cancel ordering information for the Songbirds stamps are below.

Collectors requesting first-day cancels are encouraged to purchase their own stamps and affix them to envelopes. The first-day cover envelopes should be addressed for return (a removable label may be used), and mailed in a larger envelope addressed to Songbirds Stamps, Postmaster, 401 Tom Landry Freeway, Room 645, Dallas, TX 75260-9998. Requests for first-day cancels must be postmarked by June 6.

The Postal Service’s uncacheted set of 10 first-day covers for the Songbirds stamps is USPS item No. 689316 at $9.30. USPS order numbers for stamps and FDCs also appear in Linn’s 2014 U.S. Stamp Program.