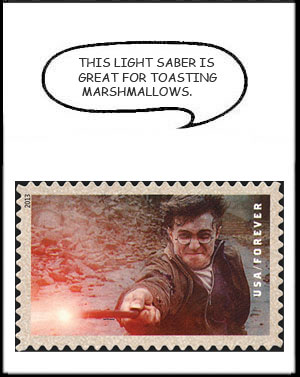 Richard Alsgaard of Michigan is the winner of the nonphilatelic portion of the March cartoon caption contest with this line suggesting a decidedly non-high-tech use for Harry Potter's magic wand. The next contest will be announced in Linn's May 12 issue.

"Take that, Congress," and a dozen similar variations were seen most frequently among the entries in the March U.S. Stamp Notes cartoon caption contest.

The contest featured one of the 20 Harry Potter stamps from last year's stamp issue, as shown in Figure 2.

Readers filled in that blank with a wide range of targets, including FedEx, the Citizens' Stamp Advisory Committee, naysayers, pen-cancelers, and Congressman Darrell Issa, chairman of the House Oversight and Government Reform Committee.

Many entries tied the magic in Harry's magic wand to the financial woes of the USPS. For example, "Postal Service operating losses: disappear!" is a caption proposed by Robert Judy of Millersport, Ohio.

A somewhat less hopeful approach was taken by Michael Jahr of Oconomowoc, Wis., with "It's no use! Not even my wizardry can restore USPS solvency."

Those of us who have been so bold as to criticize the Harry Potter issue as unnecessary, excessive, or both, came in for a pasting by several entries; represented by "Death to those who dare disparage Harry Potter stamps!" from Lawrence Segel of Valhalla, N.Y.

A fitting but subtle rejoinder was offered by Mildred Barylski of Alexandria, Va., who has Harry saying, "The magic is in the marketing!"

Choosing a philatelic line winner from among the many entries was difficult, as four of every five entries had a philatelic connection. Ultimately, I went with the somewhat whimsical "Watch it, or I'll turn you into a space filler!" sent in by Emmanuel Atsalinos of Silver Spring, Md.

On the nonphilatelic side, a nonmagical use for Harry's wand, shown in Figure 2, took the honors for Richard Alsgaard of Midland, Mich.

"OK, Mr. Postal Clerk, I'll give you another taste of my laser unless you come up with some right-side-up Jennys real fast!" by Edgar Dunlap of Gainesville, Ga.

"I only accept mail from owls," from Robert Wolf of Montgomery, Ill.

"The post office has finally come up with something to keep dogs away that works!" sent by John Niehaus of Ankeny, Iowa.

"Another rise in rates? Blast you!" by David Dickens of Lexington, Va.

"Remember when addressing mail always use the ZAP Code!" from Steve Kotler of San Francisco.

The next cartoon caption contest will be announced in the May 12 Linn's.