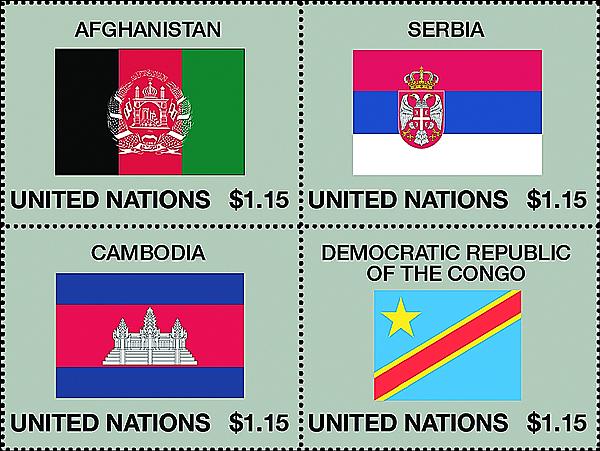 The United Nations Postal Administration will issue four se-tenant stamps March 27 displaying the flags of Afghanistan, Serbia, Cambodia and the Democratic Republic of the Congo.

The United Nations Postal Administration will extend its Flag series with four stamps to be issued March 27. The stamps show the flags of Afghanistan, Cambodia, the Democratic Republic of the Congo and Serbia.

All four stamps are denominated $1.15 to pay the international rate for letters mailed from the post office at U.N. Headquarters in New York City.

Like the previous stamps in this U.N. Flag series, the designs are se-tenant (side-by-side).

According to UNPA, this is the first time that the flags of Serbia and the Democratic Republic of the Congo have appeared on stamps in the Flag series.

UNPA added that the flags of Afghanistan and Cambodia have changed significantly since their previous appearances on Flag stamps issued in 1987 (United Nations/New York Scott 513) and 1989 (563), respectively.

Also, when Cambodia’s flag was featured on a 25¢ stamp in 1989, that country was called Kampuchea.

Afghanistan has changed its flag many times in the 20th century. The current flag, adopted in 2002, features three equal-size vertical stripes of black, red and green with Afghanistan’s coat of arms in the center. The coat of arms shows a mosque, two flags and sheaves of wheat.

Like the flag of Afghanistan, the flag of Cambodia depicts a religious building, Angkor Wat, in its center. The temple complex is shown on a horizontal red stripe with blue stripes above and below it.

This flag originated in 1948 and was used until 1970. When the country became a constitutional monarchy in 1993, the 1948 flag was readopted.

Serbia’s tricolor flag is red, blue and white with the coat of arms featuring a crown and a double-headed eagle in the center.

This basic flag design dates back to the 19th century, but the latest version was adopted Nov. 11, 2010.

This flag features a five-pointed yellow star and a red stripe on a sky blue field.

Rorie Katz of the United Nations designed the stamps.

Lowe-Martin of Canada printed them by offset in a quantity of 400,000 each. The stamps are in panes of 16, with four se-tenant blocks of four. The center block includes all four stamps.

Each stamp measures 40 millimeters by 29mm and is perforated gauge 13.3.