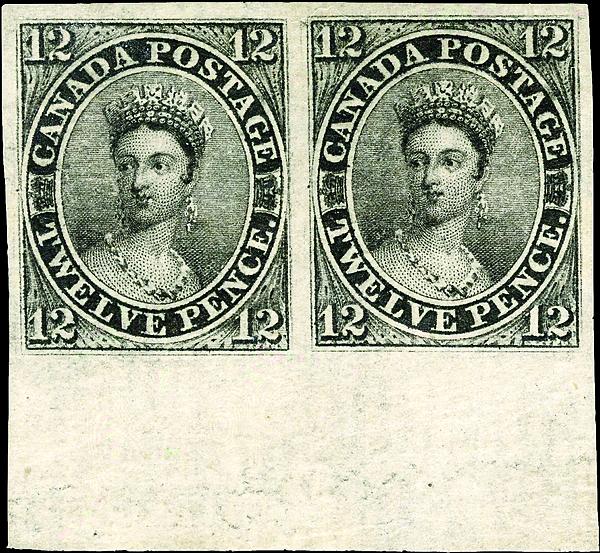 The only marginal pair of Canada’s 1851 12-penny black in private hands is part of “The Pence and Cents, 1851-1868” exhibit by Ron Brigham. The exhibit will be featured in the court of honor at the 2014 American Philatelic Society Sta

Ron Brigham’s world champion exhibit “The Pence and Cents, 1851-1868” will be featured in the court of honor at the American Philatelic Society’s annual summer convention and exhibition.

The exhibition, presented in association with Brigham Auctions Ltd., is being billed as “the last opportunity for Canadian and American philatelists and the general public to view this multi-award winning exhibit before it is dispersed.”

Brigham’s auction firm currently is offering his Canada collection through a series of auctions taking place near Toronto. The second of these sales is scheduled for June 6-7; details appear in Linn’s June 2 issue on page 1.

The Pence and Cents issues are the earliest stamps of Canada as a province, prior to the act of confederation that created the Dominion of Canada in 1867.

These early issues are among Canada’s most treasured philatelic rarities. The designs show the Canadian beaver, and portraits of Queen Victoria, Prince Albert and French explorer Jacques Cartier.

The exhibit includes essays, proofs and postal history, as well as the stamps and their many important varieties.

Brigham’s exhibit, recently featured at the May 30-June 1 Royal 2014 Royale exhibition in Halifax, Nova Scotia, is the only exhibit of Canada to win the Grand Prix d’Honneur, which occurred at the Belgica 2001 World Philatelic Exhibition in Belgium. It had previously been named the APS Champion of Champions exhibit in 1998.