British stamps to be issued June 5 will show five sustainable fish in one se-tenant (side-by-side) strip and five threatened fish in another se-tenant strip. The stamps were printed in separate sheets of 50, generally sold at post offices in Great Britain in panes of 25. 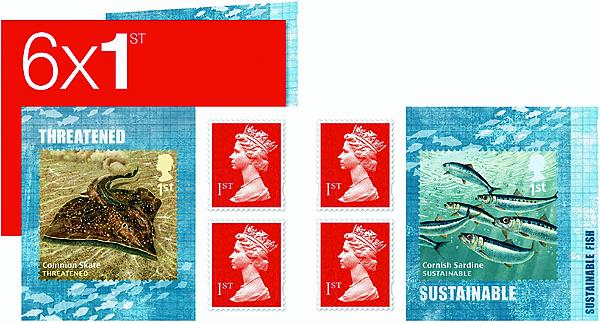 A British booklet to be issued in August will include two stamps from the Sustainable Fish issue and four Queen Elizabeth II definitives.

A related booklet will be issued Aug. 18.

Despite the name of the issue, only five of the 10 fish shown are considered sustainable: herring, red gurnard, dab, pouting and Cornish sardine.

Each of these stamps includes the word “sustainable” in the lower left corner below the name of the fish.

In the May issue of the British Philatelic Bulletin, Royal Mail defined sustainable fish as “those whose populations are not adversely affected if the species is hunted. Today they are being offered to consumers as viable alternatives to the species under threat.”

The other five fish species represented on the stamps are considered threatened, or at risk: common skate, spiny dogfish, wolffish, sturgeon and conger eel.

The word “threatened” appears on these stamps.

In announcing the stamps, Royal Mail said that they “both highlight the beauty of marine fish as well as provide guidance and encouragement to consumers on how to conserve UK fisheries.

“Many familiar fish are severely threatened due to a variety of factors including overfishing — this stamp issue highlights this and also provides a sustainable alternative.”

The stamps are nondenominated. The “1st” below the silhouette of Queen Elizabeth II in the upper right of each design indicates that they pay the first-class rate, currently 62 pence.

International Security Printers produced the stamps by offset in sheets of 50, sold in panes of 25 at most postal outlets.

The booklet to be issued Aug. 18 includes six stamps: two from the Sustainable Fish issue, with the Cornish sardine representing the sustainable species, and the common skate representing the threatened species; and four nondenominated first-class Machin Queen Elizabeth II definitives.

Printing details for the stamp booklet have not been released.

The Cornish sardine (Sardina pilchardus), also known as the Cornwall sardine or pilchard, was certified as sustainable by the United Kingdom’s Marine Stewardship Council in 2010.

In reporting on this assessment, the BBC said that this fish had risen in popularity in recent years, rising from 7 tons caught in 1997 to 1,800 tons in 2009.

The skate is a flat, cartilaginous fish related to rays and sharks.

Royal Mail points out that the common skate is now “very uncommon indeed in the seas around Britain.”

According to the conservation charity the Shark Trust, while the common skate is occasionally found in the Irish Sea, the Bristol Channel and the central North Sea, its range is effectively limited to northwest Scotland and the Celtic Sea.

Among the products to be offered in conjunction with the June 5 Sustainable Fish issue are first-day covers; 10 stamp cards reproducing the designs of the stamps; and a presentation pack containing mint examples of the stamps, text by marine conservation biologist Callum Roberts and illustrations by Russell Warren-Fisher.