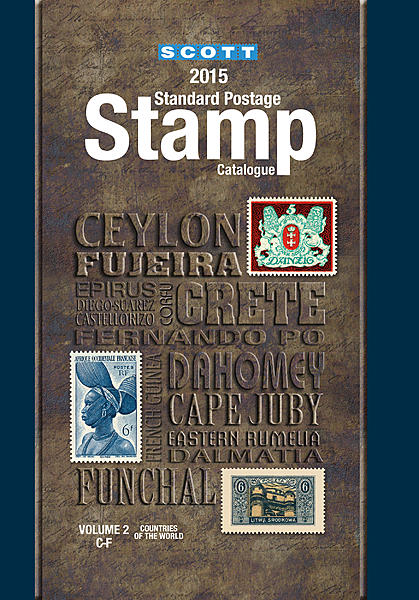 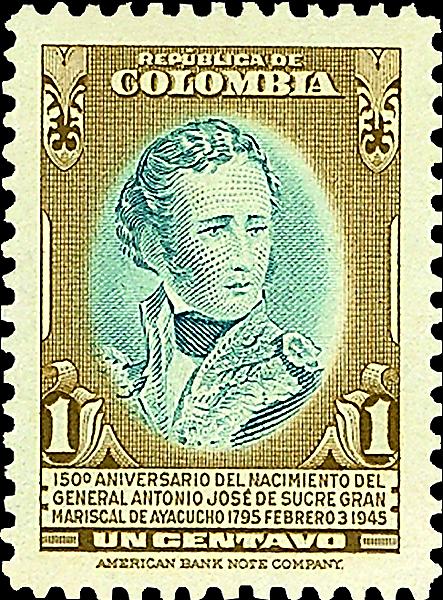 Unused Colombian postage stamps of 1946-50, such as this Gen. Antonio Jose de Sucre stamp, are valued in hinged condition in the Vol. 2 of the 2015 Scott Standard Postage Stamp Catalogue.

Thousands of value changes are recorded in Vol. 2 of the 2015 Scott Standard Postage Stamp Catalogue, which contains stamp listings for countries of the world C-F. Value activity was particularly heavy in Canada and China. There were more than 1,300 changes recorded in Canada and more than 3,500 changes in China.

The People’s Republic of China continues to be a very active market, although the activity has softened somewhat. For the most part, the changes are not drastic in either direction. Some noted exceptions are for stamps that are acknowledged and valued in the footnotes.

Numerous other footnoted stamps also have new values, and the increases in value for such stamps are greater for those issued since 2000.

More than 1,000 value changes are seen for Colombia.

Increases of 10 percent to 20 percent or so are typical for Colombian stamps issued from the 1990s to the present.

Other countries with a large number of changes include Cambodia, Estonia and French Guinea.

Vol. 2 includes a number of new listings. A total of 49 sets and souvenir sheets in the Democratic Republic of Congo are now described and valued in footnotes accompanying the listings for the normal perforated stamps.

In Croatia, a double-impression error of the 1944 Post Horn and Arms semipostal stamp (Scott B52) is newly listed as B52a. On the error, the doubling of the red is most visible in the “N.D. HRVATSKA” inscription in the scroll banner across the top of the design.

New footnotes highlight the existence of special printer’s marks on a handful of postage and semipostal stamps. The marks typically appear on a single stamp in a given pane.

In Fiji, the expansion of the listings for the surcharged Birds stamps continues this year, with the addition of three major number and five minor number listings, along with numerous other varieties that are footnoted and valued for the first time.

The cover price for the printed version of Vol. 2 and each subsequent 2015 Scott Standard Postage Stamp Catalogue volume is $119.99. Linn’s Stamp News subscribers are eligible for a discount when purchasing online direct from the publisher through the Amos Advantage program.

For more information about the 2015 Scott catalogs, contact your favorite stamp dealer or write to Scott Publishing Co., Box 828, Sidney, OH 45365, or call 800-572-6885. Information also can be found online at www.amosadvantage.com.