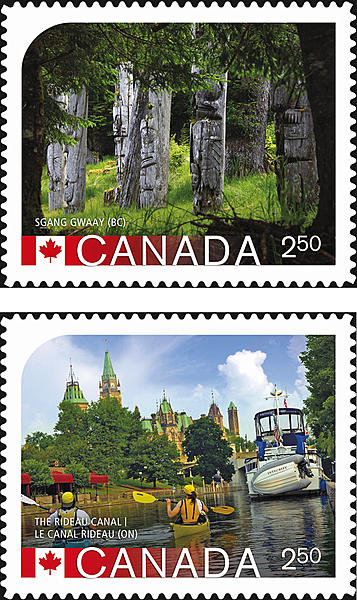 The stamps for the two denominations are offered in two separate booklets of six.

The stamps were designed by Lara Minja of Lime Design, using stock photographs.

The stamps join five definitive stamps issued in March that featured other sites. Canada has 17 UNESCO World Heritage sites, and the 10 stamps issued so far are part of a multiyear program in both definitive and commemorative formats, according to Canada Post.

The booklet stamps have serpentine die cuts on all four sides. The souvenir sheet stamps are perforated approximately gauge 13.

The printing quantities for the set are 960,000 booklet stamps of each denomination, and 160,000 souvenir sheets.

The set of five international picture postal cards is item 262399.

Canada Post will service 13,000 each of the souvenir sheet on the official first-day cover. The FDCs will bear a postmark from Lunenburg, Nova Scotia, and is item 403935144.