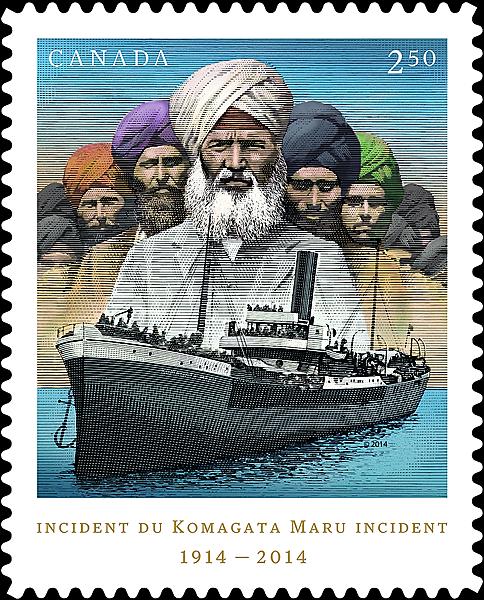 Canada Post will mark the centennial of the 1914 Komagata Maru incident with a $2.50 international-rate stamp issued May 1 in a booklet of six.

On May 23, 1914, the Japanese freighter Komagata Maru arrived in the harbor of Vancouver, British Columbia, with 376 passengers from India on board — 340 Shiks, 24 Muslims and 12 Hindus — seeking to immigrate to Canada. Before the incident ended almost five months later, only 20 were allowed to enter Canada, and another 19 were killed upon their return to India.

A website devoted to the Komagata Maru incident was created by the Simon Fraser University Library and funded by the Department of Citizenship and Immigration Canada under the auspices of the Community Historical Recognition Program. The website summarized what happened: “On May 23, 1914, a crowded ship from Hong Kong carrying 376 passengers, most being immigrants from Punjab, British India, arrived in Vancouver’s Burrard Inlet on the west coast of the Dominion of Canada. The passengers, all British subjects, were challenging the Continuous Passage regulation, which stated that immigrants must ‘come from the country of their birth, or citizenship, by a continuous journey and on through tickets purchased before leaving the country of their birth, or citizenship.’ The regulation had been brought into force in 1908 in an effort to curb Indian immigration to Canada.

“As a result, the Komagata Maru was denied docking by the authorities and only twenty returning residents, and the ship’s doctor and his family were eventually granted admission to Canada.

“Following a two month stalemate, the ship was escorted out of the harbour by the Canadian military on July 23, 1914 and forced to sail back to Budge-Budge, India where nineteen of the passengers were killed by gunfire upon disembarking and many others imprisoned.”

Illustrator Mark Summers created the artwork for the stamp. United States stamp collectors will recognize Summers scratch-board style artwork because he used this technique in designing some of the Distinguished Americans stamps and the 2009 Abraham Lincoln stamp set (Scott 4380-4383).