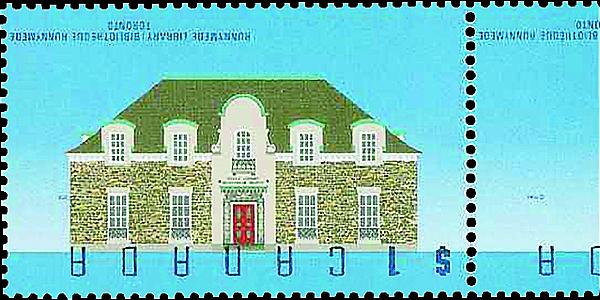 The 1989 $1 Runnymede Library sheet margin mint single stamp with inverted engraved inscriptions, position 15 from the unique pane of 25 errors, will be offered by Eastern Auctions Ltd. 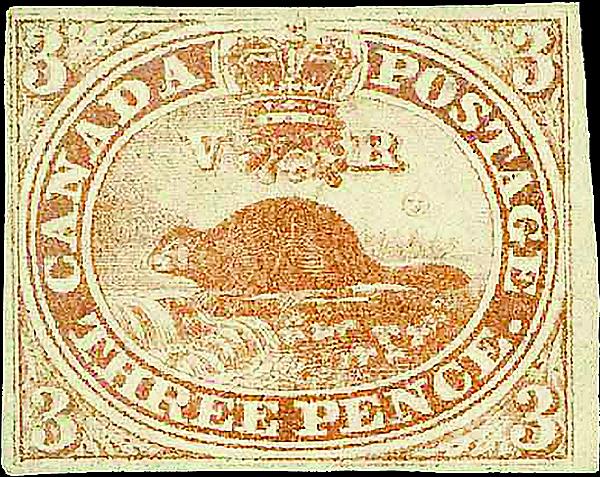 The 1851 3-penny Beaver, Canada’s first stamp. This sound mint example with original gum will be offered during the May 29-30 public auction by Eastern Auctions Ltd.

Remarkable classic stamps of Canada are offered alongside choice modern errors in the May 29-30 public auction by Eastern Auctions Ltd.

The sale will take place at the Lord Nelson Hotel and Suites, 1515 S. Park Street, Halifax, Nova Scotia, Canada. The auction is being held in conjunction with the annual show of the Royal Philatelic Society of Canada.

The 3p Beaver is described as “an exceedingly rare flawless 1851 three pence on laid paper with original gum,” with clear to large margins all around. The stamp comes with a 2001 Philatelic Foundation certificate.

For sound mint examples of this stamp with original gum, the Unitrade Specialized Catalogue of Canadian Stamps recommends adding 100 percent to the assigned catalog value. The stamp is offered with an estimated value of $120,000. Bidding is accepted in Canadian funds.

A key item of the Large Queens issue is the 1876-77 15¢ greenish gray perf 11½ by 12 with the “Alexr. Pirie & Sons” script watermark (Scott 30d). The Eastern sale offers what is described as an unusually well centered, unused example with bright color and impression, completely sound. Accompanied by a 2002 Greene Foundation certificate, the stamp is listed with a $30,000 estimate.

Also on offer is an imperforate tete-beche horizontal strip of six of the 1899 2¢ carmine die II on horizontal wove paper with full sheet margin at both ends, a scarce variety of Scott 77. The strip, ex-Vincent Graves Greene Collection, carries an estimate of $5,000 plus.

The selection of intriguing varieties continues with many examples from throughout the history of Canadian stamps, well into the modern era.

Two examples of higher denomination errors with inverted inscriptions will be offered during the second day of the sale.

The mint single example of the 1989 $1 Runnymede Library error stamp (Scott 1181a) is from position 15 of the only known pane of 25 and is therefore offered with the attached printed margin selvage, estimated at $17,500.

The mint 1995 $2 Provincial Normal School with inverted inscriptions is a corner margin example offered with a $12,000 estimate.