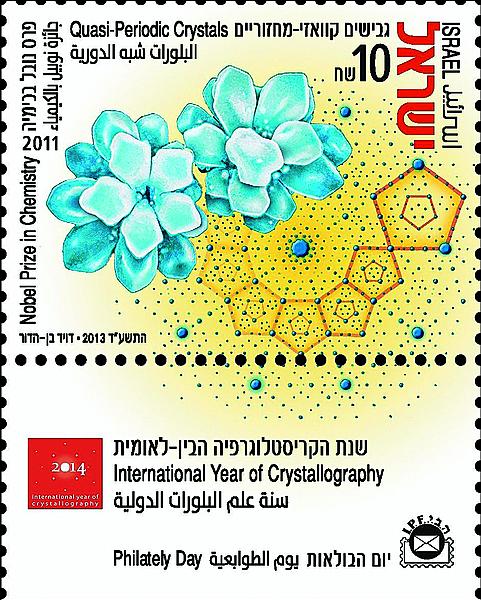 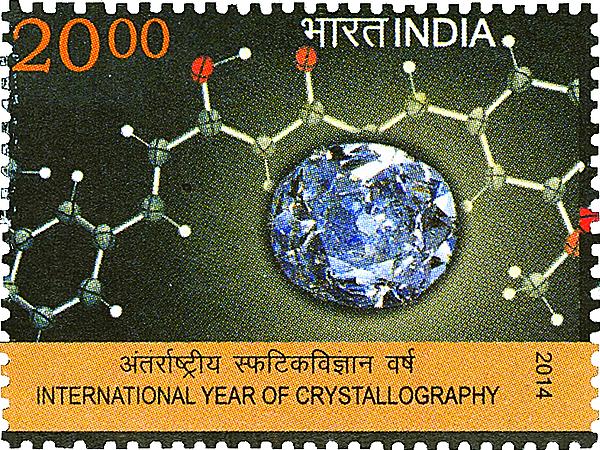 Figure 4. A stamp from India shows a diamond and the molecular structure of curcumin, which gives the spice turmeric its yellow-orange color.

Figure 3. Slovakia honored the International Year of Crystallography on this stamp and label issued Feb. 14.

Figure 2. Epidote and amethyst are featured on Switzerland’s International Year of Crystallography stamps. 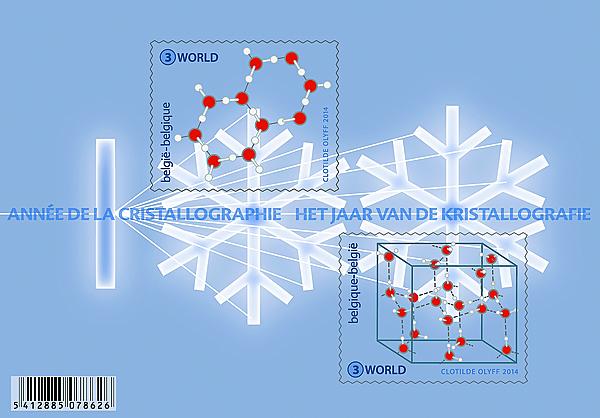 A joint issue between Belgium and Slovenia will celebrate the International Year of Crystallography as declared by the United Nations. Other postal administrations also are issuing stamps to promote this year.

Crystallography is the branch of science that studies the structures of crystals.

According to the website for the International Year of Crystallography, www.iycr2014.org, it “commemorates not only the centennial of X-ray diffraction, which allowed the detailed study of crystalline material, but also the 400th anniversary of [Johannes] Kepler’s observation in 1611 of the symmetrical form of ice crystals, which began the wider study of the role of symmetry in matter.”

Belgium’s Bpost reports that its souvenir sheet for the year will include two transparent self-adhesive stamps. The sheet is shown in Figure 1 from a publicity image.

The stamp at upper left shows a hexagonal ice crystal. A cubic crystal is pictured on the other stamp, and snowflakes are depicted in the background.

Both stamps are nondenominated. The inscription “3” followed by “world” indicates that they pay the third weight step, 100 grams to 350 grams, on international mail.

Belgian designer and typographer Clotilde Olyff designed the stamps and souvenir sheet. According to Bpost, it will be issued June 10 with an advance sale date of June 7.

The Slovenian souvenir sheet was illustrated in the March issue of Posta Slovenije’s bulletin for collectors. The sheet appears to be almost identical in design to the Belgian sheet, except that the stamps are denominated €0.64.

The 85-centime stamp features epidote, a green mineral often described as the color of pistachios. Epidote is found in Switzerland, the United States and many other countries.

Amethyst, a variety of quartz, is shown on the 1-franc stamp. The American Gem Society calls amethyst “a beautiful blend of violet and red that can be found in every corner of the earth.” Over the centuries, it has been associated with royalty, religion and myths.

Cartor Security Printing printed them by offset with hot foil stamping in panes of 12.

Reporting on the stamps in Swiss Post’s Focus on Stamps, Jurg Schefer, president of Swiss Society for Crystallography, explained the subject’s significance: “Crystallography is present everywhere in our daily world: in modern drug development, nanotechnology and biotechnology. It forms the basis for all new materials, from toothpaste to aircraft components.

“The 29 Nobel prizes that have been awarded in this sphere are further evidence of the importance of crystallography. The Year of Crystallography is undoubtedly worthy of two commemorative Swiss Post stamps.”

Figure 3 shows the €1 stamp with a se-tenant label. The inscription is in Slovak on the stamp and in English on the label.

The symbolic design represents a recent discovery in the field of crystallography. A diagram of red dots is revealed when the stamp and label are viewed under ultraviolet light.

Igor Bencka designed the stamp. It was printed by offset in sheets of 30 by the Postal Printing House of Securities in Prague, Czech Republic.

India’s stamp for the year pictures a large diamond in the foreground and the molecular structure of curcumin in the background.

The main ingredient of the spice turmeric, curcumin is known for its anti-inflammatory properties. Long used in traditional medicine, curcumin has been the subject of many recent studies to determine its benefit in fighting certain cancers, Alzheimer’s and other diseases.

Figure 4 shows the stamp. It was issued Jan. 30 at the Indian Institute of Science in Bangalore. It was printed by offset at the Hyderabad Security Printing Press.

Israel honored Philately Day and the International Year of Crystallography on a 10-shekel stamp issued Dec. 3, 2013. The emblems of the two events can be seen on the label, or tab, attached to the stamp in Figure 5.

Inscriptions on the stamp mention the 2011 Nobel Prize in chemistry and quasi-periodic crystals. Israeli scientist and professor Dan Shechtman received the award for the discovery of these crystals, also known as quasicrystals. Shechtman is currently running for president of Israel.

David Ben-Hador designed the stamp. Cartor printed it by offset in sheets of 15 with five tabs.

At least two other nations, Liechtenstein and Portugal, have announced plans to issue International Year of Crystallography stamps later this year.