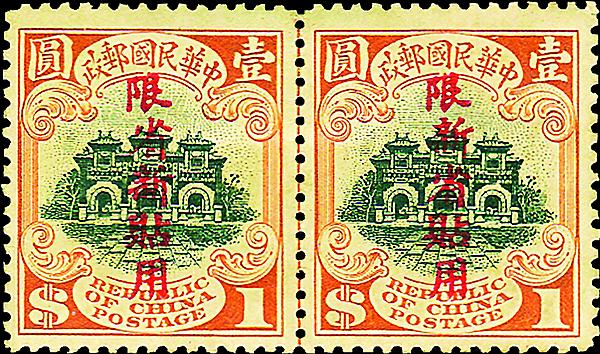 This mint pair of the 1915 ocher and black $1 stamps overprinted for use in the Chinese province of Sinkiang includes an error in the overprint on the left stamp in the pair. 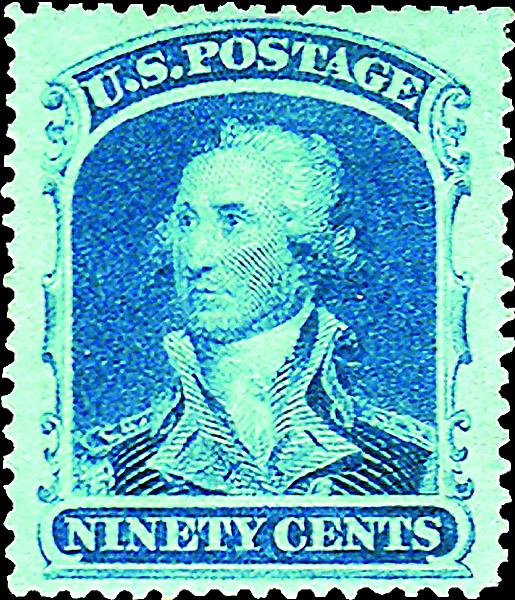 A choice United States classic stamp and an intriguing Chinese overprint error are just two of the many attractive offerings in the June 7-8 auction by Regency-Superior.

The auction will be held in conjunction with the Napex stamp show taking place June 6-8 at the Hilton McLean Tysons Corner, 920 Jones Branch Drive, McLean, Va.

Additional information about the show can be found in this issue of Linn’s on page 20.

The auction includes U.S. singles and sets; errors, freaks and oddities; essays and proofs; Confederate states; worldwide singles and sets; U.S. and foreign covers and accumulations; collections and much more. Some of the material originates from the holdings of Chicago stamp dealer and collector Bob Weisz, popularly known as Stamp King.

The auction begins at noon Saturday with an 1847 New York 5¢ black provisional stamp (Scott 9X3b) and continues with examples from the 1847-56 U.S. imperforate issues.

Described as a four-margin jumbo stamp with rich color and previously hinged full original gum, it is offered with an estimate of $6,750.

These booklets (and similar booklets for the less rare 1¢ green stamps) were manufactured by the Bureau of Engraving and Printing and issued during World War I for the use of American Expeditionary Forces in Europe.

Each booklet contained 10 panes, and 3,000 booklets were produced of each denomination, but it’s been estimated that 20 or fewer of the 2¢ panes still exist.

The booklet pane in the Regency-Superior auction comes with a 1997 Philatelic Foundation certificate and is listed with an estimate of $27,000.

A recently unearthed rarity from China is a mint horizontal pair of the 1915 $1 Gateway stamps overprinted for use in the northwestern province of Sinkiang.

The stamp on the left includes an overprint error that has the second and third Chinese characters transposed. The single error stamp (China-Sinkiang Scott 16a) has a value of $70,000 in the 2014 Scott Classic Specialized Catalogue 1840-1940; this example attached to the normal stamp is offered with an estimate of $35,000.