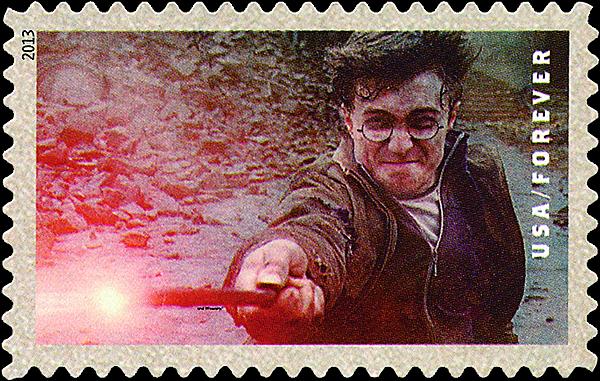 The Harry Potter commemorative stamp set was voted the least necessary stamp issue for 2013 with 557 votes. One of 20 stamps is pictured here.

The Vintage Seed Packets forever stamps, issued in a double-sided pane of 20, were voted the best-designed United States definitive issue of 2013, with 191 votes. 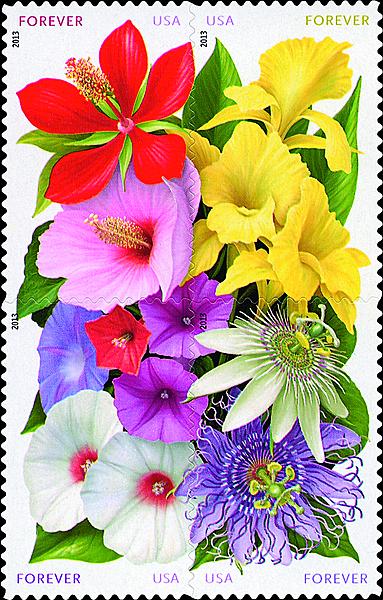 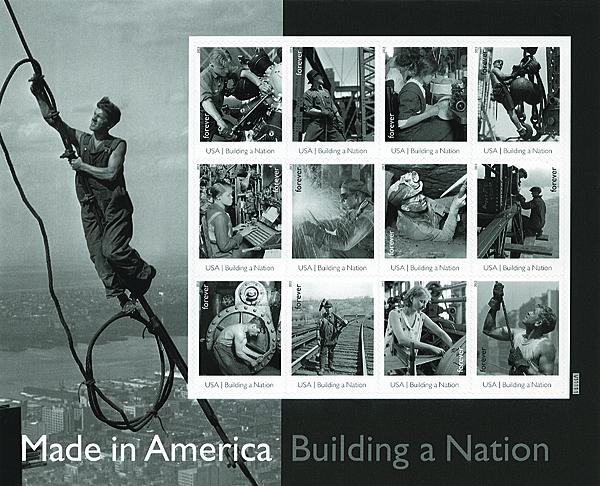 The Made in America pane was the overall favorite stamp issue in the 2013 U.S. stamp poll.

The set of 12 Made in America commemorative forever stamps was voted the overall favorite stamp issue in Linn’s 2013 United States Stamp Popularity Poll.

The selection of the set follows a tradition of Linn’s readers voting for issues or sets with multiple designs rather than a single-design issue. Only three times since the favorite stamp category was established in 1984 has a single-design issue been picked as the overall favorite.

The Made in America stamps received 149 votes as the year’s overall favorite issue, but the set was closely trailed by three contenders. Following in second place was the $2 Jenny Invert stamp with 135 votes, the Medal of Honor: World War II forever stamps with 133 votes, and the Civil War 1863 forever stamps, with 110 votes.

Readers of all ages mailed in a total of 1,483 ballots.

The tables provided with this article list the poll results for the overall favorite and for the three specific categories of commemorative stamps, definitive and special stamps, and postal stationery.

A separate section on the ballot was reserved for the voter’s overall favorite 2013 stamp.

The totals reported here represent only the paper ballots mailed in by Linn’s readers. Online voting was introduced with the 1997 Linn’s U.S. stamp poll, but extreme online ballot box stuffing has taken place from time to time, including this year. The online vote totals were rejected because of an unusually intense interest in the Gingerbread Houses forever stamps, which received 1,868 online votes as the overall favorite. The next highest online vote-getter drew 51 votes.

Mail-in ballots and online votes were accepted from mid-December through early March. The ballot was published weekly in Linn’s during the voting period.

The poll total includes 68 mail-in ballots from children, mostly from school classes and youth stamp clubs. The youth votes are counted equally with all other votes, but they also are looked at separately by Linn’s editors to gauge how youngsters view the U.S. program.

The winner for youth overall favorite was the Muscle Cars issue, followed distantly by the Harry Potter stamps and the La Florida stamp issue.

In general voting, the La Florida stamps placed first as the best-designed commemorative issue, with 219 votes.

The New England Lighthouses stamps came in second, with 199 votes. Third place went to the Civil War: 1863 stamps, with 162 votes.

The Medal of Honor: World War II stamps handily took top honors as the most important commemoratives, with 421 votes.

The Emancipation Proclamation stamp, with 249 votes, and the Civil War: 1863 stamps, with 240 votes, placed second and third, respectively, in the most-important commemorative category.

Readers dismissed the Lydia Mendoza stamp as the worst-designed commemorative, with 212 votes. The Year of the Snake stamp was a close second in the same category, with 194 votes.

With 557 votes, the Harry Potter stamps were overwhelmingly picked as the least necessary 2013 commemorative issue. This follows a trend of poll voters not favoring modern cartoon characters or pop culture subjects on stamps.

Second place in the least necessary commemorative category, with 159 votes, went to the Jenny Invert stamp.

In the best-designed definitive and special stamps category, the Vintage Seed Packets stamps beat out all others, with 191 votes. Second place went to the Gingerbread Houses stamps, with 160 votes.

Voters chose the Patriotic Star stamp as the worst-designed definitive or special stamp, with 215 votes. Second place went to the Kwanzaa stamp, with 182 votes.

The least necessary definitive or special stamp, with 231 votes, went to the Eid stamp. The Kwanzaa stamp took second place, with 152 votes.

The Arlington Green Bridge stamped envelope was selected as having the best design for postal stationery, with 439 votes.

The Folk Art Eagle forever stamped envelope was chosen as the most important, with 641 votes.

The Deer postal card and corresponding reply card were picked as the worst designed and least necessary postal stationery items, with 673 and 553 votes in those respective categories.

In general, in the 2013 poll, voters looked favorably on stamp subjects that broadly represent the United States.

As in years past, many Linn’s readers included comments with their ballots, giving reasons for their votes and expressing opinions about the U.S. stamp program in general.

“I thought 2013 had many beautiful and creative designs,” said Andrew Simmons. “It is hard to pick one best.”

Jerry Ramsey commented that it was an uninteresting year in stamps, stating “I usually don’t like definitives, but many were nicer to use than the commemoratives.”

Reader Mike Clement expressed his displeasure with the Poinsettia forever stamp saying it was “quite possibly one of the dullest and most bland depictions to ever grace a stamp.”

Dennis Daugherty wrote, “The La Florida stamps are one of the prettiest stamps the post office has ever issued.”

Of the Harry Potter issue, Jerry Adams said: “I never heard of Harry Potter before the stamps. There is one stamp of the 20 that I’m going to save which is the white owl. It’ll fit into lots of topics. The other 19 stamps are junk as far as I’m concerned.”

“One pop critic, writing when Ray Charles was alive, said we should have built a fence around him and declared him a national treasure,” Steven Maginnis stated. “I agree, and that’s why this stamp is my favorite for 2013.”

Roger Tollerud shared his thoughts on the $2 Jenny Invert stamp, commenting, “I think the public at large, the USPS and the collecting community would have been better served if this had been a forever stamp.”

Thanks to all Linn’s readers who participated in this year’s poll. Special thanks go to teachers who distributed ballots to the students in their classes, and to stamp clubs that submitted ballots after distributing them to members during club meetings. Participating groups who identified themselves include:

Voting in Linn’s U.S. Stamp Popularity Poll for 2014 is scheduled to begin in December.