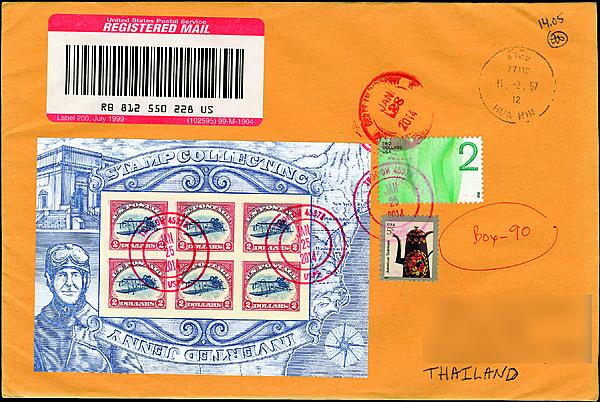 The author used an intact Jenny Invert pane of six to send this registered cover to a friend in Thailand. The $12 pane paid most of the required $12.95 registry fee.

Of the 100 elusive upright Jenny Invert panes randomly and blindly distributed by the United States Postal Service, Linn’s has documented 18 finds via reports from the USPS and collectors.

With 82 left to be discovered, I can report that my search for a winning lottery ticket has thus far not been successful.

Though I was determined to purchase a small number of the panes, I now find that I have more than a few that need to be used.

Unlike a real lottery ticket, however, a normal Jenny Invert pane can be used for postage.

To make efficient use of the panes, I decided to send parcels and registered letters to stamp-hobby friends living overseas.

Two panes were used to send two packages of clipped stamps to friends in Denmark. Because of the weight, each package required about $14 postage. A single Jenny Invert pane and a mix of low-denomination definitives provided attractive frankings for both mailings. And my friends were more than happy to return the envelopes to me after they had been received.

Additional panes were used to send small registered letters to other friends.

One of these people happens to live in Thailand. I began corresponding with him after purchasing a couple of covers from him via eBay.

When I proposed using a Jenny Invert pane to send him a registered letter, he readily agreed to return it to me.

Illustrated nearby is the cover after its trip from Ohio, where I live, to Thailand and back.

The cover was postmarked Jan. 25 in Troy, Ohio, and transited through the registry processing center in Jamaica, N.Y. (near John F. Kennedy International Airport), Jan. 28, as shown by the red postmark that ties the $2 Waves of Color and Jenny Invert pane to the envelope.

Nicest of all is the Hua Hin, Thailand, receiving postmark at upper right, dated Feb. 11, because it confirms that the cover did arrive at its intended destination.

Registered mail is handled securely, which often means that it moves from origin to destination without the application of any transit and receiving postmarks.

A cover with a similar franking, not shown, was sent to another correspondent in Fiji.

At some point, I will need to reach out to others willing to help me with my Jenny Invert cover collection.

Perhaps you are wondering how I managed to affix an intact Jenny Invert pane to the pictured cover.

I then affixed the pane to the envelope and carefully removed the sticky notes.

This technique works very well with most self-adhesive panes and sheets. The key is to be patient and methodical.